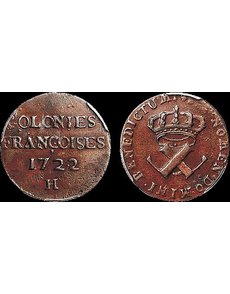 The copper coinage of 1721 and 1722 was authorized under a royal edict from King Louis XV. The coins were struck on copper blanks from Sweden. The H Mint mark on the 1722 9-denier piece, shown, indicates La Rochelle.

The first large-scale emission of copper coins for the American continent was not struck in London, or New Haven, or Morristown, or Philadelphia. It wasn’t struck in 1749, or 1787, or 1793. It was struck in 1721, in the French cities of La Rochelle and Rouen.

By the edict of June 1721, an emission of about 5 million copper coins denominated as 9-denier pieces were authorized by the French crown for all French colonies of the New World, including Canada; French-controlled areas of the interior of North America; the young city of New Orleans and the province of Louisiana; and the French islands of the Caribbean.

The coins bear a simple design: the obverse shows the large legend COLONIES FRANCOISES or “the colonies of the French,” along with the date and Mint mark, B for Rouen or H for La Rochelle. On the reverse, two large crowned crossed L’s (for Louis XV) appear along with the legend SIT NOMEN DOMINI BENEDICTUM or “Blessed be the name of the Lord.”

Just a small proportion of those authorized were struck, though exact mintages are unknown.

About 534,000 were sent to Canada in 1722, but, in a situation reminiscent of what happened with the Virginia halfpence of 1773, they sat in a warehouse until local authorities got permission to circulate them.

Compared to English halfpence and French sous, they were dramatically underweight. Undeterred, authorities revalued them at 6 deniers, but they still weren’t widely accepted. In 1726, most of them were shipped back to France, rejected and unused.

Strong evidence suggest the coins saw wider circulation in Louisiana, and some or most of the rejected pieces from Canada seem to have ended up there. They have been found archaeologically in places like Louisiana and coastal Alabama, proving their presence in the area, despite the fact that early 18th century sites there typically yield few coins.

The average grade of surviving 1721 and 1722 9-denier pieces today averages around Very Good, and surface problems are commonplace. With just three years of active circulation in Canada before their rejection and shipment back to France, presumably most of the extensive circulation they saw — decades upon decades judging from the typical very worn survivors — took place in French Louisiana. Why most American collectors dismiss them as Canadian is confounding, particularly considering the popularity of so many issues with little or no provable American connection.

Any 1721 or 1722 9-denier coin is scarce, and the 1721-B 9-denier pieces coined at Rouen stand as one of the significant rarities of the early American copper series.