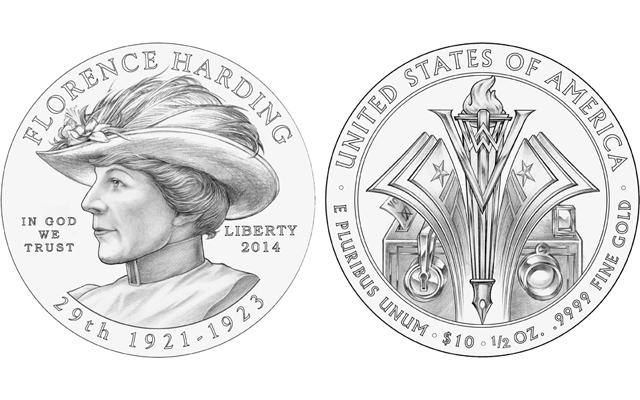 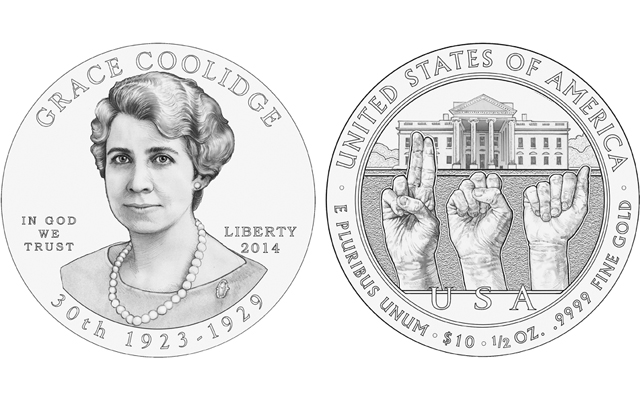 The first of the 2014-W First Spouse $10 gold coins, honoring Florence Harding, will go on sale at noon Eastern Time July 10 by the United States Mint.

The Proof and Uncirculated half-ounce .9999 fine gold coins for Grace Coolidge will go on sale at noon Eastern Time July 17.

Pricing for both coin issues won't be disclosed until closer to the release dates, since the U.S. Mint formulates prices for its precious metals coins through a pricing grid that is based on the precious metals market.

Design details for the two coins were provided by the Mint:

According to the Mint website: “Mrs. Harding championed the cause of World War I veterans, symbolized by the initials WWV that form a torch, transformed into a pen at its base to represent her extensive correspondence with veterans, their spouses, and widows. The camera represents her orchestration of photo opportunities supporting her husband’s campaign. The ballot box represents her distinction as the first First Lady to cast a vote for a presidential candidate, her husband.”

According to the Mint website: “Mrs. Coolidge advocated for the deaf and hearing impaired. This design depicts three hands finger-spelling the letters USA in American Sign Language against the backdrop of the White House.”

The U.S. Mint has not disclosed release dates for the Lou Hoover and Eleanor Roosevelt First Spouse gold coins.