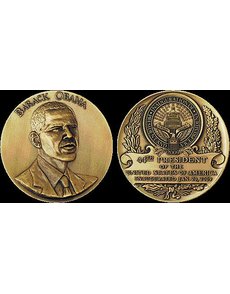 The Medalcraft Mint Inc. produced the 2009 official inaugural medal for President Obama’s first term, shown, and already has developed designs it plans to submit for consideration for the 2013 second-term medal. 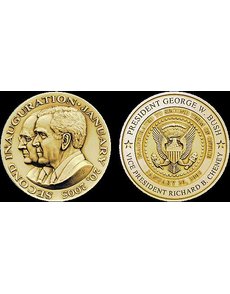 With the 2012 presidential election now history and President Barack Obama elected to a second four-year term, one of many tasks his Presidential Inaugural Committee will be addressing is the issuance of an official inaugural medal.

At least two private mints, including the firm that produced the 2009 Obama inaugural medal, already have designs ready to contend for the 2013 official inaugural medal.

The official inaugural medals should not be confused with similar medals produced by the U.S. Mint. For more than a century, the Mint has traditionally produced a medal for each president, with that medal simply referred to as a presidential medal. The U.S. Mint did not produce a presidential medal for President Obama’s first term since the bureau received no direction from the White House to proceed with executing proposed designs.

U.S. Mint officials have given no indications that a first-term presidential medal will ever be struck, nor that one will be struck for the second term, either.

At least two major private mints have plans to submit designs for consideration for the official second-term inaugural medal.

The Medalcraft Mint Inc., which executed President Obama’s first inaugural medal in 2009 at its Green Bay, Wis., facilities, is one of the firms. It already has produced Proof lead strikes featuring four sets of proposed obverse and reverse designs the firm plans to submit to the PIC’s medal design subcommittee, once one is established, Jerry Moran, Medalcraft’s chief executive officer, told Coin World Nov. 7.

Moran said the proposed designs for the 2013 inaugural medal will subsequently be struck in bronze, with those struck bronze prototypes submitted to the PIC’s medal design subcommittee.

Unlike the first-term inaugural medal, which just depicts President Obama, the second-term medal’s obverse design will feature joint portraits of the president with his vice president, Joe Biden, as is traditional.

Three different artists and an in-house team at Medalcraft each executed one proposed obverse and one proposed reverse for the 2013 medal, according to Moran. The artists are Marc Mellon of Connecticut, who designed the 2009 Obama medal obverse; Amy Kann, of Narberth, Pa.; and Peer Hansen, Brooklyn, N.Y.

Moran said Hansen and the in-house team also each produced single obverse and reverse designs for a Mitt Romney first-term medal in case the Republican contender won the election.

Ross Hansen, founder of Northwest Territorial Mint in Auburn, Wash., which acquired Medallic Art Co. in Dayton, Nev., in July 2009, said Nov. 7 he also plans to vie for the contract to produce the 2013 Obama inaugural medal, under the MACO banner.

Hansen said two outside artists and one in-house artist executed design sketches for six to eight obverses, and two to three reverses for the Obama second-term medal.

Hansen did not identify the artists.

Hansen said while the firm is currently extremely busy with various projects, he believes the firm can improve on past adopted designs, specifically the 2009 Obama medal obverse.

Medallic Art Co., founded in New York in 1903, has a history of producing official inaugural medals. The firm is responsible for the following medals:

The official inaugural medals are generally offered to the public for purchase. The medals are often offered in multiple compositions and sizes. ¦