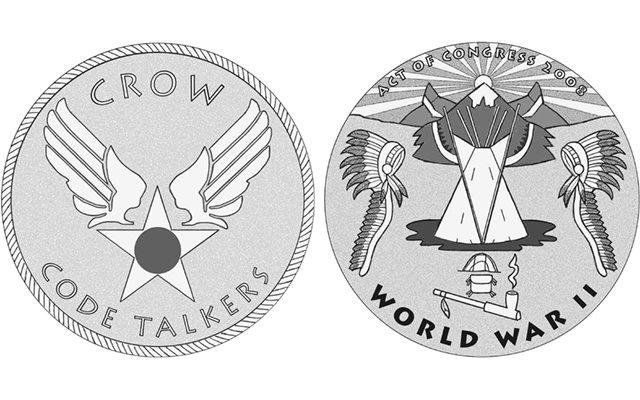 Proposed designs recommended May 15 by the Commission of Fine Arts for a Crow Tribe Code Talkers congressional gold medal depict the Army Air Corp wings on the obverse and elements of the tribal seal on the reverse.

Proposed obverse and reverse designs for a Code Talkers congressional gold medal honoring the Crow Tribe were recommended by the Commission of Fine Arts at its May 15 meeting.

The Crow Tribe medal is one of 33 congressional gold medals recognizing Native American tribes whose members served as Code Talkers during World War I and II. The medals are authorized under the Code Talkers Recognition Act of 2008, Public Law 110-420.

In addition to the single gold medal to be presented to the tribe, silver versions are being presented to Code Talkers or their family representatives. Bronze duplicates are also being offered by the U.S. Mint for sale to the general public.

The Citizens Coinage Advisory Committee is scheduled to review the same proposed designs at its noon Eastern Time May 19 meeting at the Omni Hotel at Independence Park, 401 Chestnut St.,  in Philadelphia.