Finding tokens in rolls of half dollars is a fun activity 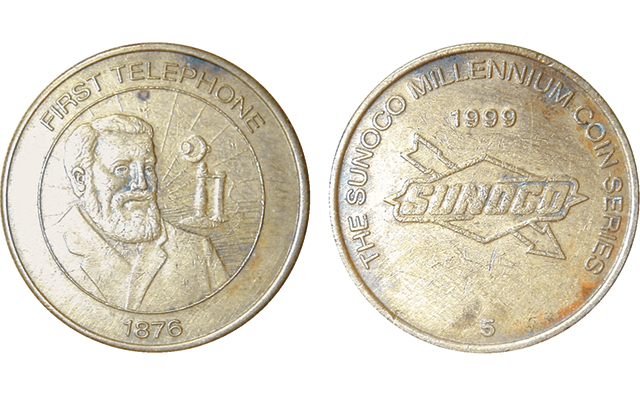 1999 The Sunoco Millennium Coin Series, were actually brass tokens. I found this one in a machine-counted roll of U.S. half dollars. 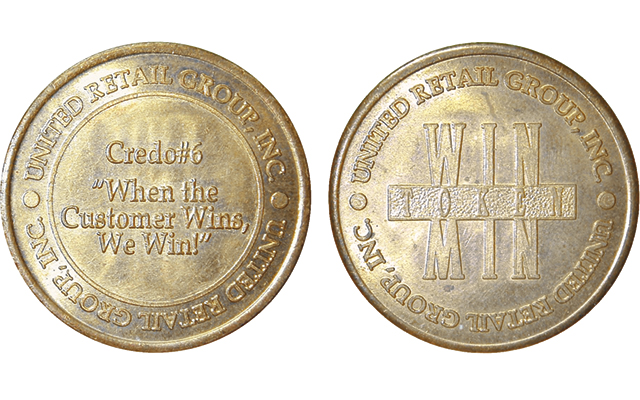 The United Retail Group Inc. issued this brass token possibly in the late 1980s. The company was a consolidated chain of women's clothing stores.

When a bank or credit union orders half dollars, the coins are delivered in sealed cardboard boxes.

Each box of half dollars, supplied by a coin counting company like Brinks, holds 50 rolls containing 20 coins per roll, which have been counted and wrapped by machine.

The mechanized process should eliminate any noncoin items that may have been introduced into the coin counting system.

Still, despite any safeguards in place, sometimes a token very close in size to a U.S. half dollar will work its way unnoticed into a roll of coins.

My first find is a piece that was produced as one of a series of 10 tokens used as a promotion by Sunoco Inc., an American petroleum and petrochemical company.

From the 1999 set of “The Sunoco Millennium Coin Series,” actually brass tokens, the piece I found honors Alexander Graham Bell, who was awarded the first U.S. patent for the telephone, in 1876.

Another unusual piece that surfaced in a roll of half dollars is another brass token, apparently produced for the United Retail Group Inc.

The company was founded in 1987 when Limited Brands Inc. combined Lerner Women stores with the Sizes Unlimited store group.

A consolidated chain of stores was created in 1989 and renamed United Retail Group. They were known for their popular women’s clothing chain called The Avenue.

A French company purchased the Avenue stores in 2007, and the store’s former parent, United Retail Group Inc., filed for bankruptcy in 2012.

One side of the token has a circle with the words CREDO#6 above the phrase, “WHEN THE CUSTOMER WINS, WE WIN!” Surrounding the circle are the words UNITED RETAIL GROUP, INC., featured twice.

The other side of the brass piece shows the word WIN above the word TOKEN with a mirror image of WIN below. Again, the words UNITED RETAIL GROUP, INC. are repeated twice around the central design.