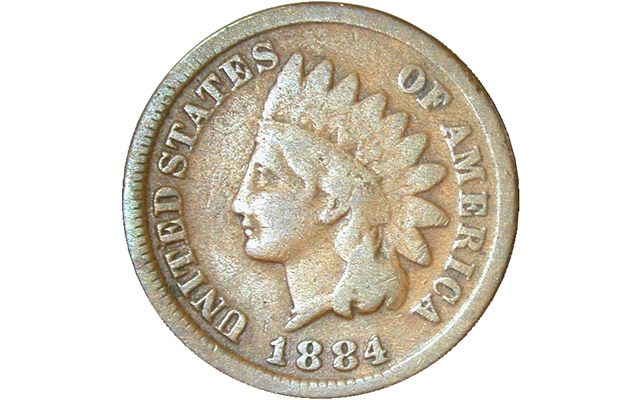 This 1884 Indian Head cent, along with a 1935 Indian Head 5-cent coin, are just two of the recent finds the author discovered while searching through rolls of coins.

Nothing is more satisfying than finding older type coins mixed in with specie of a more recent vintage.

Simply stated: I like old, I like Mint marks and I like the look of obsolete coinage. It’s different and, in my humble opinion, much more interesting than today’s money.

Even though I have found hundreds of Indian Head 5-cent coins or “nickels” in rolls before, I still get a huge kick out of finding any others that may still be in circulation.

Such was the case when a 1935-S 5-cent piece emerged from a roll. This particular coin is worn and environmentally damaged yet the remaining design details seen beneath a brownish haze of patina are reasonably strong. The representation of the bison on the reverse is still able to offer us the vision of strength that I feel was intended to be shown when James Earle Fraser designed the coin. This is not a rare coin as more than 10 million were struck, but it was still fun to have it fall out of a roll.

What could be better?

So now, what could be better than the discovery of an old “Buffalo nickel”?

I was actually able to place these two pieces in the yet unfilled openings of a coin folder designed to display Flying Eagle and Indian Head cents.

While it may not seem like much, I now have 36 differently dated coins in that folder. Since all of the following coins have been found in bank rolls during the last 10 or 12 years, I thought it might be fun to list them by their dates.

Including Flying Eagle cents, the 36 different dates represented in the album are:

While the previously listed dates are not particularly rare, some are scarce, and at least one, the 1864 with the rotated die, is a really neat error coin. In any case, adding them all to my “Found In Rolls” collection at a cost of one cent each added to the fun of their discoveries.