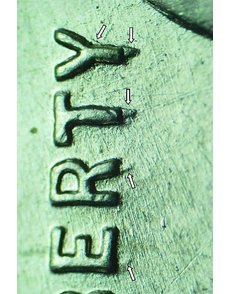 Secondary images of the berty of liberty can be seen below those letters on a 1943 Lincoln cent submitted by Dustin Farris. 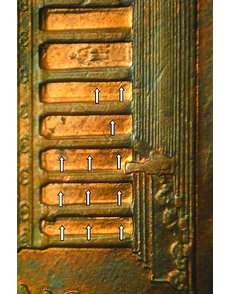 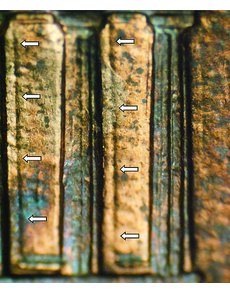 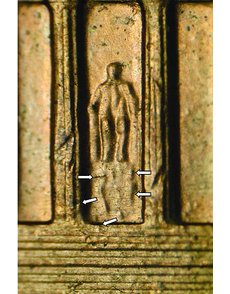 This unusual 2000 Lincoln cent from Billy G. Crawford has an apparent inverted statue below the normal statue inside the Lincoln Memorial.

The 1943 Lincoln zinc-coated steel cents are a one-year type. Dustin Farris recently obtained a roll of 1943 Lincoln cents that has been paying dividends for him. Farris submitted a coin from the roll that has a doubled die obverse new to my files. It is now listed in my files as 1943 1¢ WDDO-034.

Secondary images of the berty in liberty can be seen below the normal letters from a clockwise rotation during an early hubbing of the die. Because it was on an early hubbing, doubling did not extend to design elements near the rim. Had the doubling occurred during one of the final hubbings and extended to rim elements, the spread at the rim would have been greater than that seen on the famous 1955 Lincoln, Doubled Die Obverse cent, Die No. 1. The new find is listed in my files as 1943 1¢ WDDO-034.

We have featured some recent “extra column” Lincoln, Doubled Die Reverse cents in this column recently. Joseph Koelling and Edward Burrell each found examples of this type of doubled die.

Koelling submitted a 1993-D Lincoln cent that has extra columns or partial extra columns in the first five Lincoln Memorial bays on the left. This one is now recorded in my files as 1993-D 1¢ WDDR-014.

Burrell found and reported a 1994 Lincoln cent that has strong extra columns in the last three Lincoln Memorial bays on the right. I now list this one as 1994 1¢ WDDR-012.

Without doubt the most unusual variety to cross our desk in the past few weeks is a doubled die reverse on a 2000 Lincoln cent submitted by die variety specialist Billy G. Crawford. This strange doubled die shows an apparent inverted statue of Lincoln sitting below the normal statue inside the Lincoln Memorial on the reverse. I have it listed as 2000 1¢ WDDR-020.

I believe that to get this effect a hubbing technician stopped the single-squeeze hubbing press, reset the hub and die while rotating one of them 180 degrees, and then restarted the press to complete the impression. It sure is a strange one.