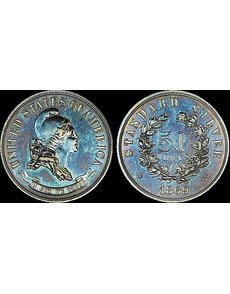 With patience, collectors seeking to add an unusual classic U.S. pattern coin to their collection might find a bargain, like this wildly colored 1869 Standard Silver half dollar pattern that sold for $862.50 at a 2011 auction.

Pattern coins are typically something that most collectors consider inaccessible due to cost and rarity.

Yet some can be found for less than $1,000 that still pack that undeniable “wow” factor that accompanies unusual patterns.

Those seeking an “affordable” classic U.S. pattern coin under $1,000 must accept that it will likely have some issues, like wear, cleaning or a repair.

Perhaps the most regularly found classic patterns coins are the many cents produced during the 1858 to 1859 period of transition from the Flying Eagle to the Indian Head cent. The Mint struggled in properly striking the Flying Eagle cent. But the vast number of pattern cents produced in this period likely results from the demand for these unusual coins from contemporary collectors and dealers and the Mint’s eagerness to meet that demand.

For example, at a July 15 Heritage auction, an 1858 Indian Head cent, Judd 208 (United States Pattern Coins, Experimental & Trial Pieces by J. Hewitt Judd), graded by Numismatic Guaranty Corp. Proof details, reverse burnished, sold for $862.50. The coin features the familiar Indian Head cent obverse that would be adopted in 1859, but with a reverse laurel wreath similar to that used on the Flying Eagle cent.

Occasionally, bargains can be found with scarcer issues, such as a Standard Silver 1869 dime (Judd 696) graded Proof 58 that sold for $776.25 at a Jan. 6 Heritage auction. The Standard Silver series was proposed as a new coinage model but was not adopted. As a bonus, both sides of all of these coins feature designs not used on regular issue coinage.

A 1869 Standard Silver half dollar, Judd 742, realized $862.50 in a July 8, 2011, Heritage auction. It had a touch of wear and some rather shocking electric blue toning that ANACS deemed artificial, but it certainly would be a standout in most collections.

Moving up the price scale to $2,000 offers additional choices, including the aforementioned common types in higher grades.

An expanded budget can allow for a wider range of interesting types, though still with various impairments.

For example, an 1866 Seated Liberty, With Motto dollar in copper, Judd 541, with reeded edge, struck from the regular issue dies, is handsome at first glance, with its rich mahogany toning. However, closer inspection reveals scratches in the obverse fields. The pattern sold for $2,167.75 at a June 1 Heritage auction. It’s a curious coin that will always get attention.

True, one’s options are rather limited when looking for affordable pattern coins. However, rare and desirable pieces do occasionally come on the market that test one’s patience in waiting for the right buying opportunity more than one’s wallet. ¦