Finding a "saint" among a roll of quarter dollars a rarity 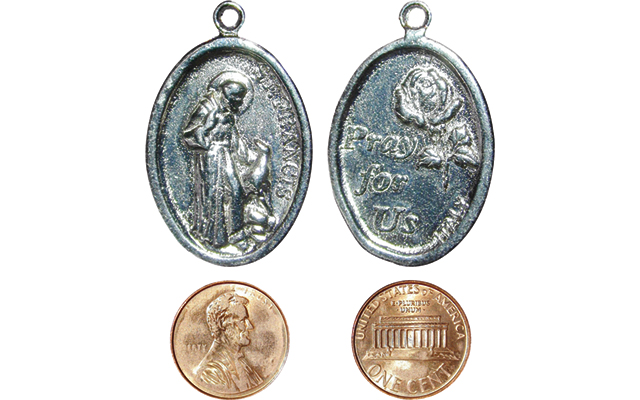 A recent surprise find in a roll of quarter dollars was the medal at top, depicting St. Francis of Assisi ont he obverse and a pettition for prayer on the reverse. Images below show a Lincoln cent struck through grease that minimizes details of the coin's obverse, a piece the author found in a roll of cents. Details on the coin's reverse are fairly normal.

One of my recent finds was a bit of a surprise!

Between coins in a roll of quarter dollars I found a small medal depicting St. Francis of Assisi with his hand upon what appears to possibly be a greyhound dog.

Francis was canonized as a saint in the Roman Catholic Church by Pope Gregory IX on July 16, 1228.

St. Francis is known by many as the patron saint of animals and of the environment, and is one of two patron saints of Italy.

The medal measures 1-inch tall by 0.75-inch wide, and is silver in color, although it is easy to tell that the piece is not really composed of silver.

The medal was produced in Italy. It seems that these medals are produced under the title of “St. Francis Pet Medal.”

Another discovery for this week is what appears to be a circa 2000 Lincoln cent that was struck through a heavy layer of what is often called grease.

The grease is actually a layer of lubricant sometimes containing other bits of grit or debris. In this case, there was an apparent accumulation of material on the surface of and in the recesses of the obverse die.

When a die inadvertently becomes layered with the gunk that is sometimes a part of the minting process, the details from the die do not properly strike up on the finished coin.

As you can see, the details of Lincoln’s bust are weak as are the date, IN GOD WE TRUST and LIBERTY.

While some might postulate that this coin is simply one that was weakly struck, it only takes a look at the reverse of the coin to prove that the coin was struck by a filled obverse die.

The reverse of this coin, appearing relatively normal, indicates that the coin was struck with enough pressure to raise the coin’s details.