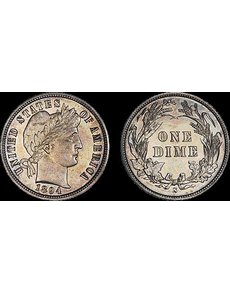 John Feigenbaum of David Lawrence Rare Coins spent years seeking to purchase the 1894-S Barber dime he has just acquired, but he is already working to place the rarity with a new owner, although reluctantly.

“I paid a lot more for this coin than I ever wanted to, but in this market, rarities hold their value,” Feigenbaum said April 22. “I wanted that coin.”

Several weeks ago, Feigenbaum said, he received a telephone call from the owner with an offer to sell the coin for a non-negotiable price. Feigenbaum said he quickly accepted the offer in April on behalf of his Virginia Beach, Va., firm, not wanting to lose another opportunity to purchase a coin that he missed out on acquiring at auction six years ago.

Yet Feigenbaum is already poised to resell the coin to a new owner.

“If I could own it forever I would, but I have to make the best use of my capital flow,” Feigenbaum said April 22. “You can be a collector or a dealer, but it’s hard to be both.” Feigenbaum says he gets the same level of enjoyment from the coin whether he sells it immediately or owns it forever.

Feigenbaum said April 22 that, if he sells it now, he hopes he has the opportunity to sell it again in the future.

Feigenbaum did not disclose what he believes the coin is worth, but said interested buyers may contact him directly for the proposed asking price for the coin.

The coin is graded Proof 64 by Professional Coin Grading Service and stickered by Certified Acceptance Corp. for its quality.

“From an eye appeal perspective, it is my favorite of all the known 1894-S dimes, despite the fact that two other examples have higher grade values,” Feigenbaum said.

The dime purchased in April is one of three 1894-S Barber dimes that John Feigenbaum and David Lawrence Rare Coins have acquired. The firm’s familiarity with the coins has led it to maintain its own pedigree listings for the known examples. The newly purchased piece is listed as the Daggett-Parker-Lawrence coin, or Lawrence 4, in the Lawrence numbering system.

“Daggett” is a reference to John Daggett, the former San Francisco Mint superintendent who was responsible for the production of the 1894-S Barber dimes. Parker is California dealer Earl Parker, who handled the sale of more than one 1894-S dime. Lawrence, of course, refers to DLRC.

Feigenbaum said he grew up filling Whitman coin folders and always wondered as a young collector why the Barber dime folder indicated the 1894-S piece was unattainable. He wanted one. He’s handled more than one, now.

DLRC has sold the Stack-Richmond or Lawrence 3 coin three times, first by private treaty to a collector in December 1998, for $825,000. In 2005, DLRC Auctions auctioned the coin as part of the Richmond Collection for $1,332,000, which included a 15 percent buyer’s fee. Two years later, in July 2007, Feigenbaum sold the coin again, this time to CAC founder John Albanese by private treaty for $1.9 million. That coin has not traded hands since, according to Feigenbaum.

The Lawrence 5 coin, certified Proof 66 by Numismatic Guaranty Corp., was purchased for an undisclosed sum from an unnamed buyer in October 2002 by David Lawrence Rare Coins and David Schweitz Rare Coins, according to the DLRC website. Legend Numismatics acquired the coin in a Heritage Auctions sale in January 2005, where it realized $1,035,000. The coin was eventually placed in a private collection.

David Lawrence Rare Coins was an underbidder on the Lawrence 4 coin in the Oct. 16 to 17, 2007, Stack’s auction, in which it was offered.

“Jack Lee and I both fell in love with this coin at first sight during the lot viewing of this sale,” Feigenbaum said. “He and I were very good friends and I still consider him a personal mentor. We decided to bid together as partners to acquire this coin in that sale, but we were outbid during the auction.” The coin sold then for $1,552,500, which included a 15 percent buyer’s fee.

Feigenbaum’s years of diligence and perseverance subsequent to being outbid finally paid off.

“Ever since then [the 2007 auction], I have been in contact with the buyer and was finally given an opportunity to acquire the coin earlier this month,” Feigenbaum said April 18. “It took me exactly five seconds to agree to the price. There was no way I would let this coin slip through my fingers.”

Inheriting a passion for history

John Feigenbaum seems to have inherited his interest in 1894-S Barber dimes. His father, David Lawrence Feigenbaum, who died in May 2002, published his registry of known examples of the 1894-S Barber dime in his 1991 book, The Complete Guide to Barber Dimes.

“My father had an incessant passion for the mystery of the 1894-S dime and I grew up with a unique passion and love for the 1894-S dime,” John Feigenbaum said.

John Feigenbaum has updated the 1894-S Barber dime’s history and pedigrees, all of which can
be found online at www.davidlawrence.com/raredime.cfm.

A number of conflicting stories have arisen about the 1894-S Barber dimes and their production at the San Francisco Mint.

“It is assumed that he fully expected orders later in the year to make a full production mintage of dimes, which would explain his special ‘Proof’ preparation of the dies,” Feigenbaum said, citing the legend. “Even though 2.6 million quarters and 4 million halves were produced in San Francisco that year, nobody knows why the Mint didn’t order the usual 1 million+ dimes for production; an event which naturally precipitated one of numismatics’ great rarities.”

Feigenbaum noted that “records of their production are included in the annual Mint director’s report.”

According to legend, Feigenbaum said, Daggett proceeded to give his three dimes to his daughter, Hallie, who is described in the legend as a young girl then who frivolously spent one of the dimes. This specimen is now affectionately known as the “Ice Cream Specimen” and is very low grade, possibly Good 4, with a reverse scratch through ONE DIME.

“She wisely held on to her other two dimes,” Feigenbaum said. “The Lawrence 4 specimen, just acquired by DLRC, is thought to be one of these two Daggett coins.”

Contemporary news accounts cite a somewhat different reason for the production of the coins. Nancy Oliver and Richard Kelly, a wife and husband team of researchers from California, wrote in the Feb. 27, 2006, issue of Coin World that they had found an October 1895 article about the 1894-S Barber dime in the San Francisco Bulletin that was subsequently published in other newspapers.

In October 1895, the 1894-S Barber dime was already selling for $5, and Robert Barnett, chief clerk of the San Francisco Mint related, in the Bulletin article, that the Mint had received numerous letters from collectors seeking an example of the dime, which had already been dispersed. The requests prompted Barnett to look into the circumstances regarding the production of the coins.

The newspaper article cited Barnett as stating that after all of the silver recovered from older coins melted at the facility had been used, a small amount of the metal remained available. Barnett related that “we found on our hands a quantity that would coin to advantage only into dimes, and into dimes it was coined, making just twenty-four of them.”

Oliver and Kelly agree that Daggett kept three of the dimes, which he passed along to daughter Hallie. The researchers note that Hallie was 15 years old at the time and thus not a “little girl” as in the legend surrounding the coin.

No matter the circumstances under which the coins were struck, Feigenbaum believes the 1894-S dimes represent the most legitimate of the major U.S. coin rarities. He referenced several great U.S. coin rarities that each carry a well-known, interesting and sometimes controversial background. Among these other great rarities are the 1804 Draped Bust dollars, the first of which were struck in 1834 rather the year the coin is dated. The five 1913 Liberty Head 5-cent coins were unofficially struck, notes Feigenbaum, who added that the 1884 and 1885 Trade dollars were similarly produced without official documentation.