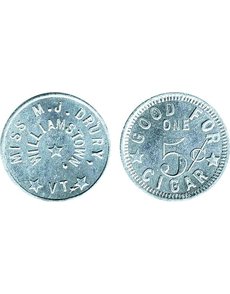 Reprising a most unusual item — the Miss M.J. Drury token — with a fascinating story linked to Alexander Kennedy Miller.

In the late 1940s, after retiring from the Air Force, Miller with his wife, Imogene, moved to a farm in East Orange, Vt. It was a rustic old place without central heating and with limited electricity.

The couple was viewed as eccentric. In the 1970s, they drove dilapidated Volkswagen Beetles, and when one stopped running, it was left to rust in the yard and another was bought. Neighbors felt sorry for them and offered charity. Miller died in 1993, and his wife in 1996.

After their deaths, the property was checked, and it was revealed that some years earlier, Miller had inherited the family fortune. Hidden from view were 30 classic Stutz motorcars, plus other “dream” automobiles; about a million dollars in gold bullion; $900,000 in stock certificates; tens of thousands of dollars in silver coins; and a bundle of $1,000 bills! And 47 little aluminum tokens, all identical and all bearing an inscription including the name miss m.j. drury.

Dave Sundman of Littleton Coin Co. was offered the numismatic coins and tokens, and purchased them.

Dave contacted several token specialists about the Drury piece. It was determined that the tokens were probably issued about 1910 and were previously unknown to numismatists. Excitement prevailed! Russ Rulau, busy at work on the next edition of his Standard Catalog of U.S. Tokens 1700-1900, stated that the Drury piece was the only such antique token with the word miss on it — out of tens of thousands of “good for” pieces. Beyond that, Vermont “good for” tokens are scarcer than are those from any other state.

Investigation identified Millie J. Drury as the owner of a fancy goods store in Williamstown at one time, also a lunchroom, and bakery. She was also interested in local history, and at the dedication of the Williamstown Public Library on Dec. 6, 1911, was a speaker.

Rulau was so impressed that he listed this 1910 token in his book that otherwise stopped at the year 1900. Littleton Coin offered them for sale at $95 each and all were sold quickly — except one that Dave gave to me as a gift.

The point of this is that a $95 token, scarcely worthy of notice in a marketplace filled with thousand-dollar coins, is to me a little treasure on its own, perhaps worth no more than the $95 Littleton offered them for — but what a story! Would you pay $95 for one?