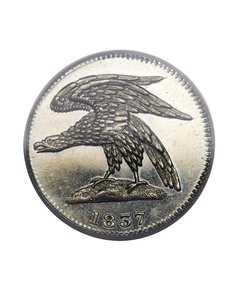 Heritage Auctions’ Houston US Coin Signature Auction, the official auction of the Money Show of the Southwest, is now open for bidding! Scheduled for November 29 - December 2 in Houston and over the Internet at www.ha.com, this auction contains an unusually wide variety of rarities for bidders to choose from.

Several of the notable highlights of this US coin auction are not US Mint products at all. A rare New York Copper with the obverse legend NON VI VIRTUTE VICI ("Not by violence but by excellence have I conquered") is coveted by collectors of both Washingtonia and Early American coinage. Although 25 examples are believed to be known, this variety is seldom offered at auction. The last appearance Heritage is aware of took place in 2004.

A 1783 shilling is one of the few private silver issues produced in America in the 18th century, and one of three silver denominations produced by Annapolis silversmith John Chalmers. The obverse of this coin features two birds fighting over a long, thin object which is believed by most numismatists to be a worm. This near-Mint coin is the rarer Long Worm variety and is only surpassed in grade by one piece.

Lewis Feuchtwanger's one cent German-silver tokens are relatively plentiful and most collectors are familiar with them, but his three cent tokens, all dated 1837, are undeniably scarce, particularly in Mint State. Dr. Feuchtwanger struck three different varieties of his three cent piece, one with a coat of arms obverse, and two with the eagle obverse. This auction offers examples of all three varieties in MS63 or finer grades, highlighted by an example of the very rare Low-119 Variety, in Specimen-65. Only six examples are believed known of this variety, distinguishable because the denomination is expressed on the reverse in both words and the number 3.

Coins having a connection to the Confederate States of America are rare and highly desirable. A small number of original half dollars and cents dated 1861 are known and even restrikes from original dies dating back to the 18th century can bring great premiums. While restruck half dollars appear at auction with some frequency, the 1874 Haseltine cent restrikes, made with the original dies for the Confederate cent, are much rarer. The Houston auction features an outstanding example, one of two known to PCGS in Proof-65 Red and Brown, with none finer.

One US Mint issue of note in the Houston auction is a medal, not a coin. A gold 1925 Norse medal is one of the top five examples of this rare issue certified by the major grading services. This piece was issued as a medal rather than a coin after abuses in other commemorative coin programs, but is commonly collected along with classic US commemorative coins. Only 47 examples were issued in gold.

This auction is open for bidding now at www.HA.com/coins.