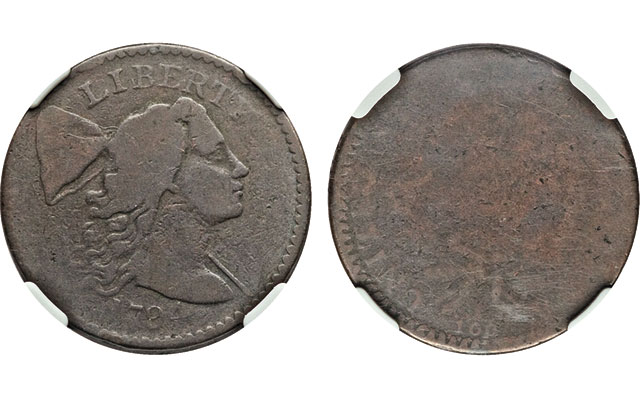 A 1794 Liberty Cap, Starred Reverse cent that was discovered by a Heritage staff member brought $28,200 at the firm’s Jan. 7 FUN auction. 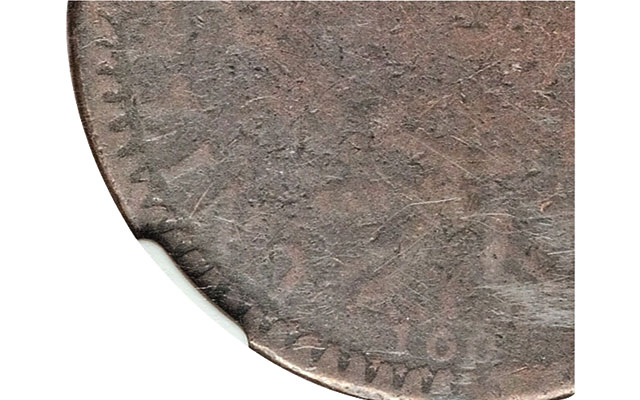 A detail of the stars visible at the reverse border of a 1794 Liberty Cap, Starred Reverse cent.

The discovery of a new example of a rare, desirable and popular coin variety is an exciting numismatic moment.

The catalog states: “This delightful Starred Reverse cent was consigned as a regular 1794 large cent with plans to be sold in one of our weekly Internet sales. However, our staff numismatists, who are always working for the benefit of our consignors, noticed the tiny stars visible on the reverse from 6 to 10 o’clock.”

The example is graded About Good 3 by Numismatic Guaranty Corp., although Heritage notes that the obverse easily grades Very Good 8. The Fair 2 reverse is typical for the issue, which generally has a weak reverse.

Examples of this popular variety are infrequently offered, and have become more expensive over the past decade.

The “Starred Reverse” cent gets its name from the 94 tiny five-point stars around the reverse that appear between and occasionally under the dentils.

The variety was discovered by 19th century dealer Henry Chapman in the 1870s and the number of known examples has grown from 10, as stated in a 1908 catalog, to an estimate of as many as 70 known today, with examples continuing to be discovered.

For example, Coin World’s William T. Gibbs wrote in 2005 the story of an Arizona coin dealer who discovered one in his inventory. Paul Gilkes wrote a story on an example that was purchased for just $25 (unattributed, of course) by a sharp-eyed Pennsylvania collector.

Heritage once wrote, “there are only a few coins that can be identified without mentioning their date. The Starred Reverse is one of those coins.”

The large cents of 1794 are popular with collectors because there are more than 80 combinations of obverse and reverse dies, although the “Starred Reverse” variety is likely the most famous.

William H. Sheldon, who wrote Penny Whimsey, the standard reference on early large cents where the “Starred Reverse” is numbered S-48, suggested that the coins were “the whim of an idle hour at the Mint.” Other theories abound.

Could it be an homage to the 94 signers of the Declaration of Independence? Perhaps it pays tribute to 1794, or were the stars considered as a possible replacement of the dentils? The issue is of great interest to numismatists and researcher Pete Smith published a book in 1986 titled The Story of the Starred Reverse Cent where he identified 41 pieces. He later updated this to include more discoveries.

Look at your 1794 Liberty Cap cents! Who knows what you may find.