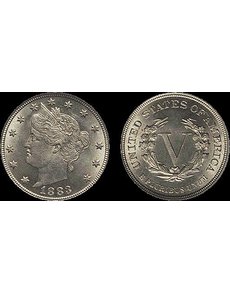 The 1883 Liberty Head, No CENTS 5-cent piece is a great coin to start off a “V nickel “ collection. It’s a one-year subtype coin, too. This brilliant Mint State 64 example realized $84 at a 2013 Heritage auction.

The Liberty Head 5-cent coin series is one in which there is literally a collecting challenge for each budget.

Collectors seeking a point of entry into coin collecting can put together a solid date set of 1900 to 1912 issues in Fine 12 condition for less than $100. Those wanting to collect a handsome set in circulated condition of all regular issue pieces from 1883 to 1912 (including the scarcer 1912-D and 1912-S issues) can accomplish that goal for less than $1,000.

The series is also interesting because it has two distinct design subtypes. The first is the 1883 Liberty Head, No CENTS subtype, which was used in 1883 only and was modified later in the year to the second, With CENTS, subtype. On the first version, the representation of denomination on the reverse by only a Roman numeral V led to some reported trickery from individuals who tried to pass the “centsless” 5-cent coins off as contemporary Coronet gold $5 half eagles. The addition of CENTS to the design ended the trickery.

1883 Liberty Head, No CENTS 5-cent coins are widely available in Mint State grades since they were saved in large quantities at the time of issue by a curious public. Nice About Uncirculated 50 examples can be found at the $15 level while Mint State 64 examples are at the $100 level. Those wanting to spend a bit more can buy gorgeous MS-65 examples for $175 to $200.

Of course, the series benefits by having a great rarity in the 1913 Liberty Head 5-cent piece. With just five pieces known, it’s too rare to collect as part of the regular series. The fact that they were struck under mysterious circumstances makes their inclusion as a regular part of the series even less secure.

What is certain is that the 1913 issue is a legendary American rarity that guarantees regular coverage to the series whenever one trades hands. A Proof 64 example realized $3,737,500 at a Jan. 7, 2010, Heritage auction.

Collectors who want to add an example to their collections are in luck! The famed Walton example, graded Proof 63 (and the subject of this month’s cover story), will cross the auction block on April 25 at a Heritage auction in Illinois.

Thankfully, typical Proof Liberty Head 5-cent pieces are more affordable. Fantastic Proof 65 examples of most dates can be found at the $500 level, even for the 1907 with a low Proof mintage of just 1,475 pieces. Proofs of most dates generally trade at similar price levels, save the 1885 and 1886 coins due to pressure on those dates resulting from the scarcity of circulation strikes for those years. ¦