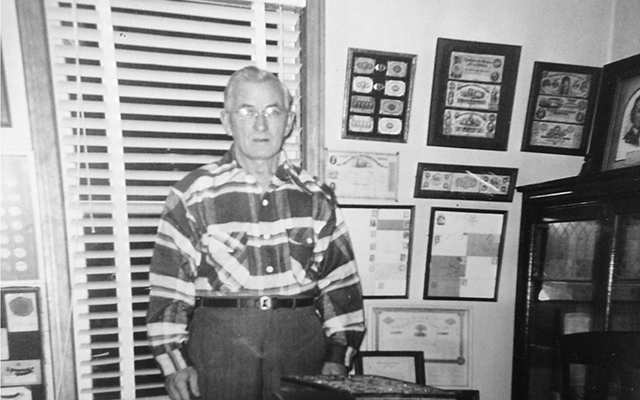 The hobby of numismatics has evolved greatly over the years. At first wealthy people would set aside coins of interest. At some point these collectors could no longer find the older issues or issues from other countries and the business-end of numismatics came to be. Today millions of coins are bought and sold from dealers and collectors every year.

Many of these transactions use some form of technology to complete the deal. But not long ago transactions took days or weeks to complete, which was fine with the buyer and seller.

At the age of 11, my great-grandfather Ernest Hack began collecting coins and obsolete bank notes. This is not too unusual until you realize he was 11 in 1900. There were far fewer numismatists in the country then, and very few dealers. Ernest was a paperboy and saved the unusual money he came across that he could afford such as copper-nickel 3-cent pieces. In 1910, at the age of 21, Ernest opened a coin and stamp shop in Detroit, one of the first such establishments in that city. The business was named Eagle Stamp and Coin Co.

Because there were so few collectors at the time, he relied on doing much of his business through the mail. I have seen envelopes, known as “covers” to stamp collectors, postmarked as early as 1912 from his business. I own an Eagle Stamp and Coin Co. cover postmarked 1914, the year his first child, my grandmother, was born.

In 2013 I attended a Hack family reunion at a cousin’s house. One of my cousins asked me to follow him to his car where he handed me a large file box. He said: “This belonged to grandpa Hack. I know you will enjoy it and care for it, so it belongs to you now.” I thanked him and placed it in my car. The whole time I was at the reunion I wondered what he had given me.

When I got home I opened the box to find a treasure trove of correspondence to and from Ernest written in the 1950s! By that point in time he was only selling at shows and to select customers at his house. He would sell anything numismatic, but his collecting passion was fully devoted to obsolete bank notes.

Most of the letters were sent with notes “on approval.” An approval is when a dealer was allowing him to look through an envelope full of notes before paying. He could pick out the notes he wanted and send a check for the ones he wanted, and return the rest. In some cases he was trading notes for other notes.

Letter writing gives a deeply personal insight to the way business was conducted at the time. Dealers would have stationery printed with their business name, dealer name, what they dealt in, and their address. Some stationery had coins depicted as well. I was impressed to see that the owners of some larger companies took the time to hand write letters, including Charles M. Wormser of New Netherlands Coin Co. Inc. in New York, and Arlie Slabaugh of West Virginia.

When I read these letters I envision a Mayberry-like time when things were slower and simpler. If you are ever able to acquire vintage numismatic correspondence, I highly recommend it. Turn your computer and smart phone off for a few hours and enjoy!

Daniel Sheffer is the owner of Daniel’s Coins and Currency LLC in Shelby Township, Mich. He is also the president of the Madison Heights Coin Club.