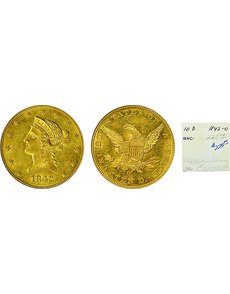 An 1842-O Coronet gold $10 eagle originally purchased in the early 1960s by a career secretary for the CIA is to be sold at public auction June 26 by GreatCollections LLC from Irvine, Calif.

The coin, graded Mint State 60 by Professional Coin Grading Service and stickered by Certified Acceptance Corp., is one of only three 1842-O Coronet gold eagles from among 123 in the PCGS Population Report to be graded in Mint State. The NGC Census Report, published by Numismatic Guaranty Corp., lists four examples in Mint State from among 223 submissions of 1842-O eagles — one grading MS-60, two MS-61 and one MS-62.

The 1842-O Coronet eagle has a reported production of 27,000 coins. The coin was struck at the New Orleans Mint.

According to GreatCollections LLC President Ian Russell, the example to be sold June 26 was originally acquired by the CIA secretary in the early 1960s for $225 at Woodward and Lothrop, a major department store in Washington, D.C.

The original envelope, bearing the 1960s dealer’s handwritten notation of “only 27,000 minted” and the original purchase price, accompanies the coin.

“The original owner worked as a secretary at the CIA her whole life,” Russell said. “Whatever money she could set aside, she bought rare coins with. It wasn’t until after her death that her family uncovered this coin.”

Russell said the woman died in 2004, and left her coins to her brother, who stored them in his basement without any idea that the collection contained a great rarity. He died in January of this year and the coins were left to his great grandchildren, who will use the sale proceeds to help finance their college educations, Russell said.

“This [1842-O eagle] was the jewel in the collection,” Russell said. “Relatives of the late owner can remember family stories about this rare $10 piece, without knowing exactly how rare or valuable it was.”

Bidding is open now through June 26. To register or view more information about this coin, visit www.greatcollections.com or telephone the firm at (800) 442-6467. ¦