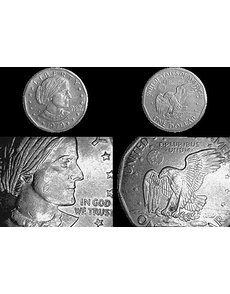 The obverse and reverse of the counterfeit 1979-D Anthony dollar appear to be die-struck from transfer dies, where a genuine coin was used as a model to produce fake dies. On the obverse close-up, the counterfeiters retooled a number of areas, including Anthony’s eye, her hair and the stars. On the reverse, areas of retooling include the eagle’s feathers, the olive branches and the designer’s initials. The overall color on the fake is dull.

Every now and then the ANACS grading staff encounters a fake coin that causes us to speculate on the motivation of the counterfeiter.

The piece illustrated here is exactly such a piece – a fake 1979-D Anthony dollar.

Since these coins are still available in roll quantities for a small premium over their face value, there does not appear to be any numismatic reason to produce fakes.

This counterfeit is not particularly deceptive, either.

The metal composition is solid, not the three layer copper-nickel clad composition of a genuine coin.

It appears to be die-struck from transfer dies, where a genuine coin was used as a model to produce fake dies. After the transfer process, our counterfeiter was not pleased with the result, as the dies were then extensively tooled and recut in areas. Notice how Anthony’s eye and other facial details differ from a genuine coin. The eagle also appears to have been given a makeover.

The weight of this fake is 7.77 grams, far enough off from the genuine weight of 8.1 grams that it would probably not work in a vending machine.

The answer to the origin of the counterfeit would likely appear to be South America.

Several of our southern neighbors have used our small dollar coins in commerce, both Anthony dollars and Sacagawea dollars.

I believe that Ecuador, for example, imported millions of U.S. dollar coins years ago, as it was more economical for the government to use our coins than to strike its own.

Since the Anthony dollar was mostly an unwanted coin in the United States, using it elsewhere was an elegant solution.

Evidently our counterfeiter decided that consumers in South America would not be able to tell the difference between a genuine Anthony dollar and his version, and went into production.

Whether the counterfeiter was able to distribute these fakes for less than $1 each is uncertain.

If total costs were too high, the entire scheme would have folded quickly.