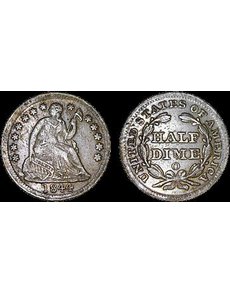 The date digits on this fake 1844-O Seated Liberty half dime are the wrong style when compared to a genuine example, the lettering is a bit crude and the left foot of the M in DIME is missing.

The 1844-O Seated Liberty half dime has a mintage of 220,000 pieces and a current value of $750 in Very Fine condition. Not that many coins from the original mintage have survived, especially in higher grades, making it one of the scarcer date and Mint mark varieties in the series. It is the kind of coin that most collectors have never seen, much less held in their hand.

So I was rather surprised when I encountered an 1844-O half dime in an order I was working on, followed by another one in the very next order. The first coin was genuine and graded Fine with some surface damage. The second coin I inspected was the piece shown here, a struck counterfeit.

It is not a difficult counterfeit to detect — the date digits are the wrong style when compared to a genuine example, the lettering is a bit crude, and the left foot of the M in DIME is missing. This fake is too heavy for a genuine half dime, weighing 1.75 grams instead of the standard 1.34 grams. Evidently, the counterfeiter had problems producing such a small, thin coin, so the forger made the coin quite a bit thicker.

Since the counterfeiter recut the date into his fake die, one has to assume that a common date half dime was used to produce the die, so the actual costs involved in manufacturing this counterfeit were fairly low. Even so, I had to wonder who the target audience for this counterfeit would be.

No half dime variety specialist would be fooled by this example, and the average collector would not be interested in a scarce date Seated Liberty half dime.

Perhaps the counterfeiter intended this fake to be sold on one of the Internet auction sites, where someone would take a chance on the coin at 10 percent of its catalog value. Another possibility would be selling this fake to a pawn shop for $50, or trying to sell it to a novice collector at a flea market, yard sale or swap meet.

When your base cost for each counterfeit you produce is less than $5, you do not need to sell each piece for close to its catalog value to make money.

The lesson to be learned here is that a collector needs to be worried about nearly any coin he or she is considering adding to a collection. At one time counterfeits were mostly limited to gold coins and key dates, such as the 1909-S Lincoln, V.D.B. cent, the 1916-D Winged Liberty Head dime and the 1893-S Morgan silver dollar.

With hundreds of thousands of fakes streaming out of Asia each year, many of which would be worth less than $50 if they were genuine, collectors need to be on their guard.

One last note — one powerful resource available to coin collectors is the Internet. At least one set of genuine images is available online for virtually every U.S. coin, so it is possible for any collector that is connected to the Internet to see what a genuine example should look like.

Given this available information, very few numismatists should end up with this type of counterfeit in their collections.