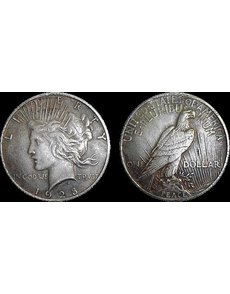 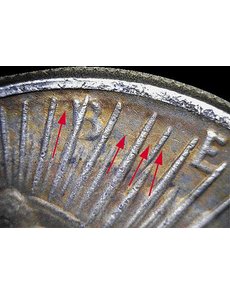 The reverse of the fake 1928 Peace dollar has a straight raised line angling down and to the right of the B in LIBERTY that is similar to a die polish line known from one of the genuine 1928 dollar obverse dies. It extends longer on both sides of the letter B on the fake coin than what appears in the same location on the genuine coin. 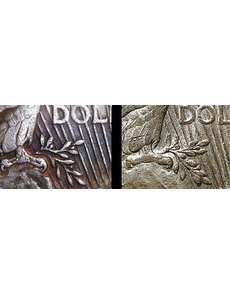 The olive branch clutched in the eagle’s left talons on the reverse of the counterfeit 1928 Peace dollar, top, appears to have been entirely reworked. At bottom is the same area on a genuine coin.

This month’s fake is a new step for the counterfeits coming to the United States from the Chinese counterfeiting mills.

It is a rather run-of-the-mill counterfeit 1928 Peace dollar that has a number of easy diagnostics.

Those diagnostics include an incorrect weight (22.85 grams versus 26.73 grams for a genuine coin) and rough, ragged details.

In addition, the person making the fake dies decided to entirely rework the olive branch the eagle is holding.

The stems and leaves are very different from a genuine coin, which is especially noticeable if you have a genuine comparison piece in hand.

The counterfeiter appears to have employed a genuine coin (or high quality images) when making the dies.

The date digits and details in Liberty’s hair and the eagle’s feathers are all faithful to the original genuine coin.

Even more interesting is that the counterfeiter appears to have added a copy of a genuine diagnostic to the fake obverse die for the 1928-dated piece.

One of the genuine dies for the key-date 1928 Peace dollar exhibits a die polish line that angles down and to the right from the B in LIBERTY.

This diagnostic is in a protected area of the coin’s design, so it remains visible on coins that have worn down to the Very Good range, making it a quick and easy way to verify genuine coins from this die.

Our featured counterfeit has a straight raised line in this area, angling down in virtually the same location.

The line is longer at both ends than the line on the genuine coin, extending further on both sides of the letter B on the fake coin.

It is entirely possible that the raised line on the counterfeit is simply the result of a light die scratch that occurred during die preparation.

As an authenticator, I tend to view coincidences like this rather suspiciously. Until proven otherwise, I am treating this as intentional.