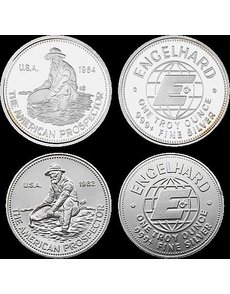 The 1984-dated Prospector piece at above left with frosted devices against Proof fields is an example of a counterfeit that was reported to have entered the market in 2012, and is apparently continuing to be seen in the marketplace. The 1982 piece with uniform, duller surfaces is genuine.

The spread of counterfeit American Prospector 1-ounce .999 fine silver bullion rounds in the marketplace appears to be growing.

Examples that were first noticed in the summer of 2012 in sales on eBay are now being offered over the counter to dealers in various parts of the country.

The counterfeit Prospector pieces periodically are also still being offered via eBay.

Spectrographic analysis of pieces obtained by at least one dealer in 2012 indicate the counterfeit Prospector pieces contain no silver.

Genuine Prospector rounds were produced in the 1980s by Engelhard Corp. They feature a 19th century prospector panning for gold on the obverse, paired with multiple reverses. The reverse designs most often encountered on genuine silver rounds show an eagle in flight while clutching an olive branch next to an American flag on staff, and what the hobby refers to as the Big E reverse showing the Englehard logo bearing the letter E on a globe.

John DeJohn from Columbus Coin and Jewelry in Bay City, Mich., reported Feb. 4 to Coin World recent incidents in which counterfeit Prospector rounds with the Big E reverse were brought into his business by a woman attempting to sell them.

DeJohn said that when he sought to test one of the pieces because he questioned their authenticity, she refused to let him and subsequently left the premises. DeJohn said he had already contacted the Michigan State Police and has surveillance video showing the customer who tried to sell the bogus pieces.

DeJohn said a similar incident occurred at a coin shop in nearby Saginaw, but the customer attempting to sell counterfeit bullion items at that store was male.

Incidents of counterfeit Prospector pieces appearing in the Dallas area recently have been reported to Doug Davis at the Numismatic Crime Information Center in Pantego, Texas.

Davis said Feb. 8 that a suspect has been identified and a warrant issued for an individual believed responsible for selling 400 to 500 counterfeit Prospector rounds at pawn shops and jewelry stores in the Dallas area. Davis said authorities are still trying to identify the source that supplied the individual with the fakes.

Coin World first learned of the Prospector counterfeits during the American Numismatic Association World’s Fair of Money in Philadelphia last August. Mike Fuljenz from Universal Coin and Bullion in Beaumont, Texas, obtained an example for educational purposes to demonstrate to those attending an Industry Council for Tangible Assets presentation the differences between the genuine pieces and the counterfeit.

Fuljenz acquired the piece through Larry Lee at Coin and Bullion Reserves in Panama City, Fla.

Lee told Coin World Feb. 7 that last July, a dealer he did not identify had purchased on eBay two 20-piece rolls for $700 per roll that later were determined to contain counterfeit Prospector pieces. Lee obtained several of the pieces also for educational purposes.

California dealer Barry Stuppler from Barry Stuppler & Co. Inc. had one of the counterfeit 1984-dated Prospector pieces subjected to spectrographic analysis to test its metallic composition.

The analysis concluded the piece had a composition of 60 percent copper, 39 percent zinc and 1 percent nickel. ¦