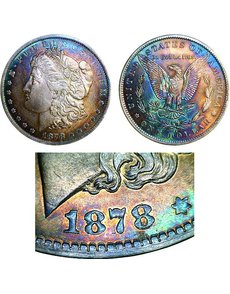 Toning was added artificially to this fake 1878-CC Morgan dollar in an attempt to hide production defects. All of the date digits exhibit tiny lumps where the edge of the digit joins the field, and both 8s are a bit misshapen. The CC Mint mark on the reverse is also from the wrong year.

With the tidal wave of counterfeit Morgan dollars washing ashore over the past few years, two things continue to surprise me.

The first surprise is how much better the Chinese counterfeiters are getting with their fakes, and the second is how often they make amateurish mistakes that make authentication easy.

This fake 1878-CC Morgan dollar is a good example. The weight, diameter and thickness of the fake are exactly the same as a genuine coin, and the sharpness of the finer details is very good. Someone added artificial toning to the coin, possibly in an attempt to divert attention away from the authenticity issues.

At first glance, there is nothing unusual about the overall appearance of this fake that would alert a casual observer. When you take a closer look, some problems begin to surface.

The details are just a bit weak and fuzzy under higher magnification, and the rim of the coin is a little too flat when compared to a genuine example.

All of the date digits exhibit tiny lumps where the edge of the digit joins the field, and both 8s are a bit misshapen.

The easiest diagnostic for this fake is something that a variety specialist will pick up quicker than the average collector. All genuine 1878-CC Morgan dollars will have a small, round CC (for descriptions and images, visit the Web site www.vamworld.com).

For the rest of the Carson City Mint Morgan dollars, my best advice is to utilize the expertise of the major grading services — ANACS, Numismatic Guaranty Corp. and Professional Coin Grading Service.