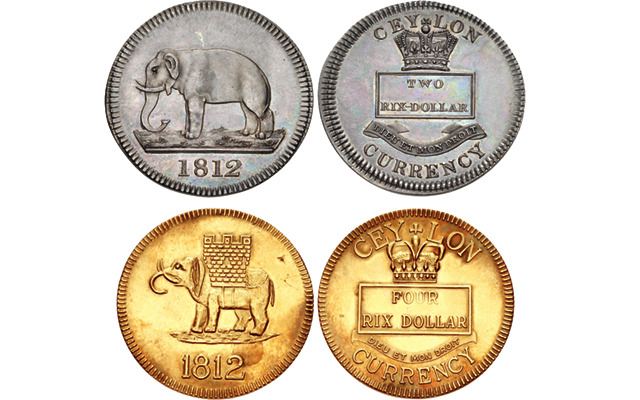 One of these coins is not really a coin. The silver 1812 Ceylon 2-rixdollar piece is real and carries an estimate of $15,000, but the 4-rixdollar piece below it is a modern forgery, and estimated at $500.

What’s the difference between a fake coin from Ceylon and a real example in a different denomination?

When you’re considering the rixdollar series from Ceylon (Sri Lanka), the answer translates to “a lot of money.”

An example of each are highlights of the Richard Lissner Collection, being sold Aug. 1 and 2 in Chicago.

Legitimate examples of the 1- and 2- rixdollar patterns, commissioned by Ceylon in 1812 and struck from dies made by Thomas Wyon Jr. at the Royal Mint in London, do exist. However, a gold 4-rixdollar piece was unknown until an example surfaced in 1972 in the offices of dealer Abe Kosoff.  According to an article by Kosoff in Coin World (May 17, 1972, issue), Henry Grunthal, then curator of European and modern coins at the American Numismatic Society, considered the piece authentic, calling it the Ceylonese “Stella,” a reference to an American gold $4 pattern.

Less, than a month later, however, Coin World reported (June 7 issue) that the gold 4-rixdollar pattern was a modern fantasy of which 75 pieces in a variety of metals were reportedly produced.

Although the manufacturer of this coin was unknown at the time, it was later discovered that it was produced by the coin dealer and author, Frank A. Lapa.

Ten examples of the 1812 4-rixdollar"pattern"  in the unspecified, brassy metal were reportedly made.

The piece in the auction is not encapsulated; the auctioneers grade this fantasy as Extremely Fine and it is sold “as is, no returns.”

The opening bid of $400 has been secured.

A real example of the silver 2-rixdollar coin, graded Proof 66 and WINGS approved (the firm reviews certified world coins), has an estimate of $15,000. The coin exhibits toning over “iridiscent bue and violet surfaces.”

The 2-rixdollar piece was purchased from Meridian Coin Co. in February 1971. An example once owned by John J. Ford Jr. sold in a 2009 auction for a hammer price of approximately $26,000 in U.S. funds.

The 2-rixdollar piece is a companion to the 1-rixdollar coin offered in the lot before it.

Classical Numismatic Group, St. James’s Auctions and M. Louis Teller are jointly auctioning the Richard Lissner Collection of 2,900 coins in 2,200 lots, at the Chicago Marriot O’Hare. The collection features coins of the world, primarily base metal, silver and gold type coins of the 19th and 20th centuries.

Printed catalogs are available for $75 in the United States and $100 worldwide. A digital version may be viewed online at the auction website.

For more information, telephone the auction representative at 717-390-9194.