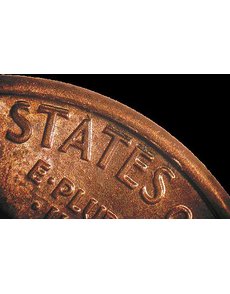 Faint letter traces corresponding to the adjacent raised letters of STATES appear on the internal margin of the design rim in this 1987-D Lincoln cent. 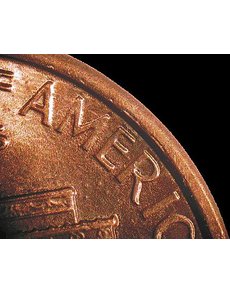 The die deterioration furrows lying above AMERICA have been transferred to the design rim. 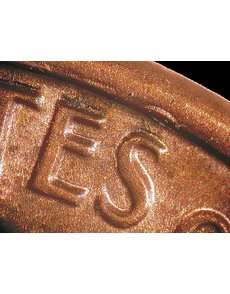 A tiny bit of the raised second S of STATES appears on the internal margin of the design rim. 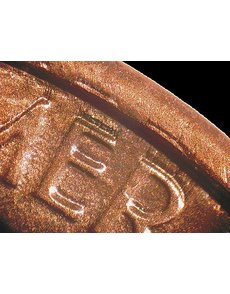 The die deterioration furrows above ER have been transferred to the design rim.

Previously illustrated examples show die-struck letters (or other die-struck elements) decorating the design rim at one pole of the face struck by the hammer die (Collectors’ Clearinghouse, Feb. 22 and May 24, 2010; Aug. 22, 2011). These extra elements were produced when the hammer die bounced up from the newly struck coin, shifted to one side, and landed lightly on the design rim. Previously described domestic cases include several 1994 Lincoln cents from at least two die pairs (obverse face), a 2004 cent (reverse face), a large number of Washington dollars (reverse face), and scattered examples from other Presidential dollars issues ending with James Madison (reverse face). Rim-restricted design duplication is therefore associated both with “traditional” die setups (obverse die as hammer die) and with “inverted” die setups (reverse die as hammer die).

My longstanding assumption that RRDD would necessarily involve the hammer die made complete sense at the time. Lateral movements of hammer die (and die assembly) are not constrained by any independent physical barrier. By contrast, the anvil die is closely confined by the surrounding collar. Any lateral movements of the anvil die would have to be severely limited. I suspect this is the reason why all forms of machine doubling associated with the anvil die tend to be more modestly developed than with the hammer die.

I was therefore quite surprised by a 1987-D Lincoln cent found by George Antenucci that shows faint die-struck letter traces along the northern arc of the reverse design rim. I am certain that the reverse face of this coin was struck by the anvil die. T

he earliest experiments in striking modern issues with inverted dies didn’t begin until 1992. This arrangement didn’t become common until 1998 and only became the dominant setup in 2002.

Traces of STATES OF AMERICA are found along the inner margin of the design rim. Despite the fact that they’re die-struck, most of the traces are incuse. The incuse traces are not impressions of the letter recesses in the die face. Instead, they are impressions of thin ridges in the die face that capped each letter recess. The ridges are a manifestation of die deterioration that left corresponding valleys in the coin. Incuse forms of die deterioration can be found in many denominations. Only the very top of the second S of STATES is actually represented by a raised trace on the design rim.

The extent of lateral movement implied by these feeble imprints are difficult to reconcile with the anvil die’s close confinement by the collar. Something more complex must have transpired.

Increased lateral play could be the result of an abnormally wide collar. However, the diameter of this coin is normal (19.05 millimeters).

Another possibility, though unlikely

Another possibility is “ejection doubling.” It has been claimed (but never proven) that a coin will occasionally resist being pushed off the face of the anvil die by the ejection mechanism. This would cause a smearing of design elements (an effect that happens to be indistinguishable from slide doubling caused by die instability). However, none of the normal letters or letter traces of the 1987-D cent show any smearing.

The most likely hypothesis involves the cent hitching a ride on the hammer die. I suspect that the newly struck coin clung to the face of the hammer die as the latter bounced up and shifted northward (obverse perspective). When the die and its attached coin descended, the design rim of the latter touched down on the field portion of the anvil die. While the hammer die was in mid-bounce, the anvil die was rising up through the collar so as to bring the (now absent) coin in line with the ejection mechanism.

This may be why the opposite pole of the descending coin was not blocked or damaged by the upper surface of the collar.