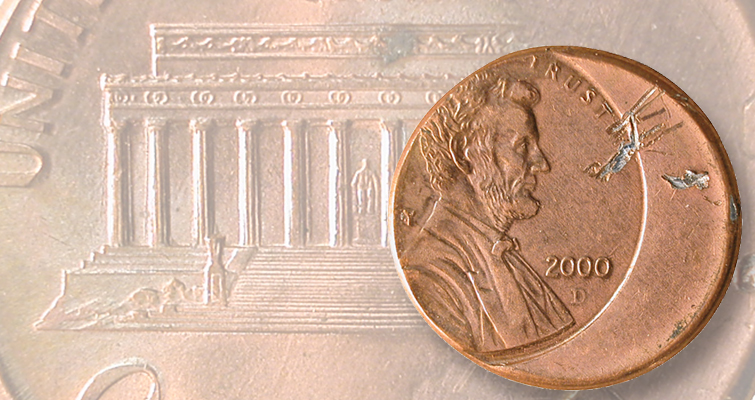 This broadstruck 2000-D Lincoln cent shows a 29 percent misalignment. This could only occur if the entire die assembly shifted to one side. 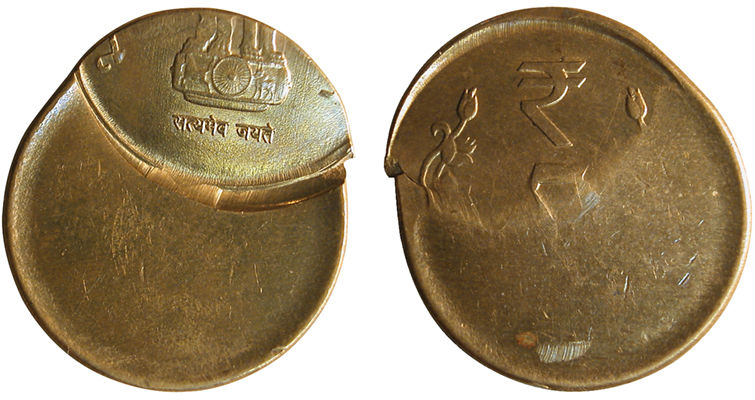 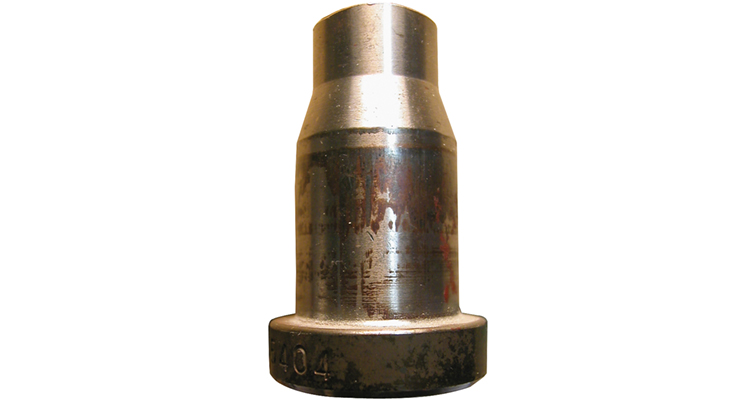 The diameter of this Lincoln cent die increases from neck to shaft to base. The brown stains on the shaft mark the location of the clamp. 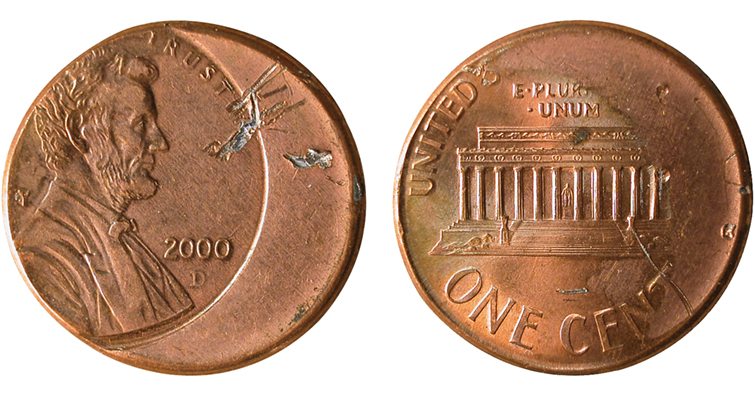 This broadstruck 2000-D Lincoln cent shows a 29 percent misalignment. This could only occur if the entire die assembly shifted to one side.

Horizontal die misalignments occur when one die is offset relative to the opposite die. The hammer die is almost always at fault for horizontal misalignments that leave major portions of the peripheral design cut off along the coin’s edge and, it seems, for all misalignments greater than 10 percent of a coin’s diameter.

Predominance of the hammer die among major horizontal misalignments is predictable because this die is anchored within a mobile assembly that normally moves up and down but can exhibit other, unintended movements. In contrast, the neck of the anvil die is surrounded by a fixed collar, and it’s very difficult to dislodge a collar or cause one to break apart. Either situation is required to free an anvil die — a prerequisite for unwanted lateral movements.

The hammer die is ordinarily locked into its assembly by a clamp. But any locking mechanism can come loose or break, allowing the die to shift to one side. The maximum lateral shift a hammer die can experience independently is determined by the difference between the width of the die shaft (which is embraced by the clamp) and the width of the die base.

Limitations on lateral movement are much tighter when it comes to denominations of 25 cents and higher. These dies lack an expanded, pedestal-like base. The shaft is either straight or flares slightly as you move away from the die neck.

Despite these theoretical limitations, horizontal misalignments far larger than 20 percent are known. Shown here is a 2000-D Lincoln cent with a 29 percent misalignment of the obverse die. This die was also rotated 23 degrees clockwise. As discussed in the June 22, 2015, column, this error could also be interpreted as a pivoted die error, where the die moves around an axis of rotation located well away from the die’s center and possibly outside the die itself.

Horizontal misalignments this large would require the entire die assembly to move, as would just about any pivoted die error. Of course, even a minor misalignment could be caused by a laterally shifted die assembly.

I have not seen any domestic coin with a horizontal misalignment greater than 50 percent. I have seen images of a 5-cent coin with a weak, rotated design rim generated by a tilted, sliding die that is located at the pole opposite the one it should occupy. I estimate the misalignment to be around 77 percent. However, the design rim terminates abruptly at both ends, leaving open the possibility that it was generated by a broken die fragment trapped between the intact portion of the die and the planchet.

The 50 percent rubicon has been unambiguously breached several times by the current array of Indian coins introduced in 2011. Shown here is a broadstruck 5-rupee coin with a 58 percent horizontal misalignment of the hammer (obverse) die. The hammer die was also slightly rotated and tilted down (i.e. a vertical misalignment), with the depressed pole pointing toward the position the die moved away from. The sharp edge of the die almost severed the die-struck area from the rest of the coin.

More extreme horizontal mis­alignments exist within this series. I have images of a 2011 2-rupee coin with an approximate 77 percent horizontal misalignment. 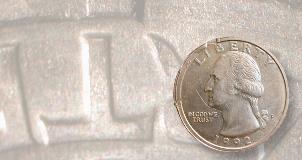 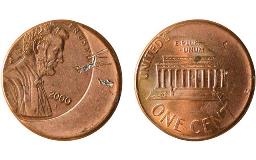 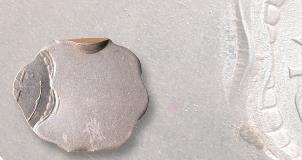