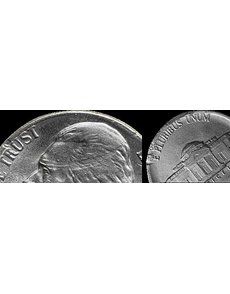 Images of a reader’s 1985-D Jefferson 5-cent piece indicate that it is a form of alteration called a “sandwich coin.” The coin was placed between several other coins and pressure applied, resulting in the transfer of design elements.

I am submitting photos of a 1985-D Jefferson 5-cent coin that has some interesting artifacts. My guess is that the coin was squeezed between two coins and the two coins left impressions on my coin.

The obverse shows the outline of a coin across Jefferson’s head. The reverse has the number 3 (I think) and the imprint of a star at 10 o’clock.

The mystery! What coin could leave an imprint as displayed by my coin? Was the impression made when the coin was minted? The number 3 appears to be a part of a date but why does the number 3 appear on a coin that was minted in 1985? Or is the imprinted number an 8 instead of a 3? What U.S. coin has a number and a star like those on my 5-cent coin?

Reader Keffer’s 1985-D Jefferson 5-cent coin does bear designs impressed into it by other coins, but the processes by which the extra design elements were added to his coin did not occur at the Denver Mint, where it was struck.

The reader’s coin is a form of commonly encountered, post-minting alteration called a “sandwich coin.” Two or more coins are stacked, one atop another, and pressure is applied. The pressure forces design elements from one coin into the adjacent coin. Because design elements on coins are generally raised, they leave incused or sunken impressions on the adjacent coins.

An examination of the extra numeral on the rim of Keffer’s coin shows it to be an 8 rather than a 3. However, with a sandwich coin alteration, combinations of dates and even denominations in a stack of coins do not have to make any sort of logical sense. All the alterer has to do is grab two or more handy coins, place them in a stack and get to work. The impressed 8 matches the appearance and size of the numerals in the date of a 5-cent coin. Likewise, the star on the reverse rim also matches that on the obverse of a pre-2005 Jefferson 5-cent coin.

The reverse side of the coin appears to have accepted several impressions of the obverse of another Jefferson 5-cent coin. It seems that pressure was applied to the stack of coins at least twice, with a shift in position of the adjacent coin between the attacks. One exertion of pressure formed the 8; another formed the star.

On the obverse, partial impressions across the portrait of Jefferson appear to be from the rim of yet another coin. These elements were also impressed into the coin during its alteration.

Why do people do this sort of thing? Good question.