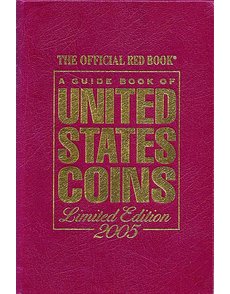 When any title has been continuously produced for decades, inevitably its publisher “extends the brand” by creating custom-made editions. Whitman Publishing has done exactly this with its prize franchise, A Guide Book of United States Coins, aka the Red Book.

? Special Editions, often created to recognize anniversaries, have a custom-printed cover wrapped around regular edition contents. The first was released in 1986, to recognize the 95th anniversary of the American Numismatic Association. More than 17 Special Editions have been produced, most with press runs of a few hundred, so values have appreciated. The 95th anniversary of the ANA edition, for example, was a party favor at the 1986 ANA Banquet in Milwaukee. By 2009, a pristine copy sold for $1,000!

? Limited Editions, the big bruisers among Red Books, are both taller and wider than regular issues. They are elegant; bound in red leather, lettered in gold leaf, with page edges gilded. The interior is also distinctive, with an insert page certifying that it is a serially numbered, limited edition, hand-signed by editor Kenneth Bressett.

Despite the high retail price of $69.95, early issues (the series began in 2005) are rising in value. The king of this set is the 2008 Numismatic Literary Guild Limited Edition, with its miniscule press run of 125. Only two have come to market, both bringing hefty prices.

? Varieties also abound. One is the “Presentation Copy,” which, beginning in 1984, has been prepared for contributors to the Guide Book (usually around 100 per year), in which a printed interleaf is bound into a regular copy.

“Association Copies” are defined as any edition signed by a notable numismatist, although most desirable are those signed by either R.S. Yeoman or Bressett.

“Editing Copies” are regular issues interleaved with blank paper, allowing contributors to write corrections for next year’s edition. No more than 50 such copies are produced each year.

The final variety is “Errors,” of which many are known. At least 23 different editions are known with their covers bound upside down relative to their contents. Editions also have misprinted or blank covers, missing pages, and even, in one case, the first 127 pages of a Red Book bound into the covers of another Whitman publication, A Guide Book of Modern United States Currency.

So it is possible to create a library of hundreds of collectible copies of the Red Book without owning a single regular edition! Choice in collecting: it’s the Red Book way!