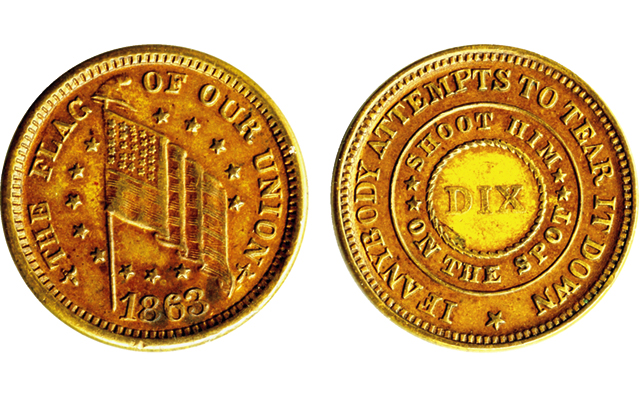 An interesting and inexpensive patriotic Civil War token is Fuld-209/412b, the numbers referring to the obverse and reverse dies. A Very Fine or Extremely Fine example is valued in the $20 to $30 range. 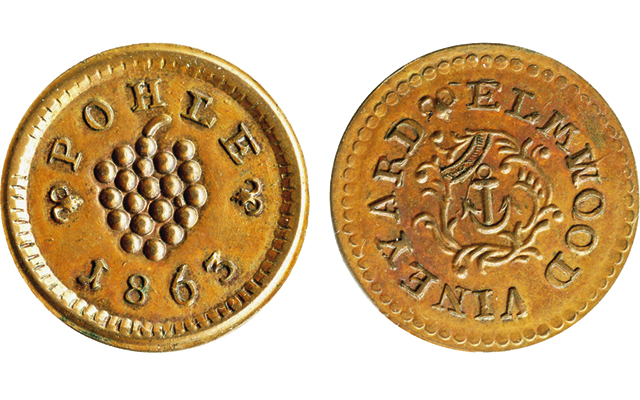 In the Sept. 29 issue of Coin World, I told of the thousands of varieties of copper tokens, fractional currency notes, Confederate notes, encased postage stamps, bills of state-chartered banks, and more issued during the Civil War.

Over the next few columns, I will explore these. Countless opportunities await to acquire rarities for nominal prices. I know of no reference book at all on one series with thousands of varieties: paper scrip notes issued by banks, merchants, and others, with denominations from 1 cent to 50 cents. Other series are more compact and well-studied. I am thinking of encased postage stamps issued by slightly more than 30 merchants and others. In any Civil War specialty, you will encounter common issues as well as rarities.

As you read these words, John Ostendorf of the Civil War Token Society is nearing completion of the third edition (vastly revised since the second edition of 1975) of U.S. Civil War Store Cards, by George and Melvin Fuld. Each variety has a Fuld number. The revised book, more than 700 pages in length, large size, will describe more than 10,000 varieties! This does not include the other section of Civil War tokens — the patriotic issues. Susan Trask is soon to start preparing a new edition of that book.

Collecting Civil War tokens is a fascinating pursuit. I’ve loved the series ever since becoming acquainted with the pieces in the 1960s. Today, in 2014, thousands of different tokens can be collected in grades from Very Fine to About Uncirculated for $20 to $50, and some Mint State tokens in the $100 range. Among rare varieties, some with fewer than a dozen known can be bought in Mint State for less than $500.

Among store cards produced for merchants, railroads, steamship lines, breweries, medical doctors, and others, there are slightly more than 1,000 issuers. I’d guess that 700 of these fall into the readily available category with regard to examples in high circulated grades. Rarer tokens nearly always sell for more than common ones, exceptions being tokens having a popular design or motif — such as the one issued by Joseph H. Merriam showing a dog’s head and the value expressed punningly as GOOD FOR A SCENT.

Many collectors endeavor to acquire one token from each town or city in which they were issued. “Rare towns” can have great value. Only three tokens, each of a different variety, exist from the Elmwood Vineyard, Cranston, R.I.

Mine, one of the three, unique as a variety, cost me $17,466, the most I have ever paid for any Civil War token, which is probably less than 1/100th of the price that a federal coin of comparable rarity would bring. Other rare towns with store cards priced from several thousand dollars up are Alton, Ill.; Oldenburg, Ind.; Cassopolis, Mich.; St. Joseph, Mo.; Ripley, Ohio; Genesee Station, Wis.; Oconomowoc, Wisc.; and Snow Hill, W. Va. — by no means a complete list.

The field of patriotic Civil War tokens is smaller, but still runs in to the thousands of pieces. The vast majority are quite inexpensive, and a budget allowing up to $100 per token will result in a very extensive collection, many costing only $20 to $30.

While it is difficult to find hidden rarity or value in most federal series, as they are carefully studied, ample other opportunities exist, including tokens. Many super rarities have been found in dealers’ “junk boxes,” as the seller had no clue what he had.

If this piques your interest, sign up for membership in the Civil War Token Society. The cost is $18 per year, for which you will get four copies of the Civil War Token Society Journal, edited by Susan Trask and with news and contributions from many members. It is one of my favorite publications. If you sign up via CWTsociety.com in the month of October and say, “I saw it in Dave’s Coin World column,” your cost will be just $13, and the CWTS will bill me $5 for my part. With no incentive other than to share my interest, I have set aside $1,000 for this purpose. Go for it!