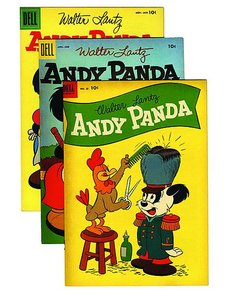 A child growing up in the 1950s could opt to use his or her discretionary income to buy an Andy Panda comic book, the one you bought when there weren’t any good comics left.

With video games, iPods and iPads, a lot of things are available to attract a child’s attention. But, I think, the big reason is that children just don’t come in contact with coins in their daily lives anymore.

When I started collecting coins about 50 years ago, children could work for money and spend it at stores that sold affordable things that we wanted.

All that has changed.

The day I turned 12, I applied to be a paperboy. It meant a steady source of income from an easy-to-do, after-school job. Before I became a paperboy (and after, too) I cut lawns in the summer and shoveled snow in the winter.

I was paid in cash, kept it in cash and spent it as cash.

Now, there are precious few places for a child to earn money. I live in a century-old city neighborhood. The neighbors who don’t cut their own lawns hire a lawn service.

As a boy, I delivered papers in the afternoon on a route I could easily cover on my bike. Today, most newspapers are printed overnight and delivered by adults in cars long before the sun rises. No child is going to get up that early and no parent wants him to.

The local newspaper moved to morning delivery in 1985 and switched to adult-only delivery shortly after that. The younger boys were pretty well shut out of the job market until they turned 16, an age when most boys have other things on their minds than coins.

When I was a boy, I could take my paper route money to the corner store and pick from dozens of 10-cent comic books.

Superman cost a dime. So did Andy Panda, the comic book you bought when there weren’t any good ones left.

Candy bars, cokes and ice cream sandwiches could be bought almost anywhere for 5 cents to a dime. If you were feeling rich you could buy a milkshake for 25 cents at the lunch counter.

The toy store had expensive toys (I once paid $10 for a Lionel switcher engine) but also a wall of dime novelties — smoking monkeys, flies in plastic ice cubes, jacob’s ladders and rockets that shot off caps when they landed. A child could go to all those places, spend his money and check his change for treasure.

I only knew one child who ever found anything of value — a 1914-D Lincoln cent — but we all looked. I had thought the State quarter dollar series would revive collecting for children, but it didn’t really.

Children just don’t come in contact with that much real money. That’s our problem.