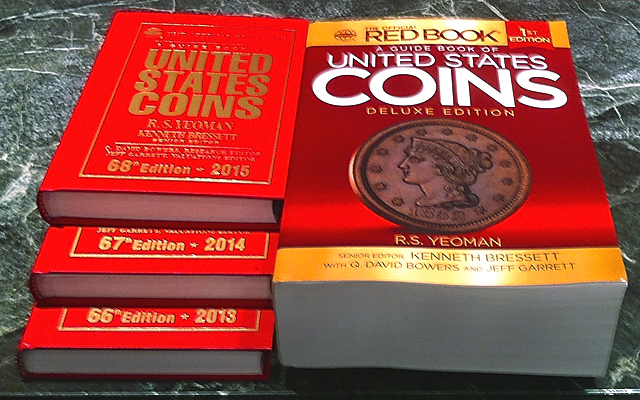 The Deluxe Edition of A Guide Book of United States Coins, dubbed “Mega-Red because of its immense size, is considerably larger in dimension and expanded in numismatic information than the standard version.

How about jumbo deluxe, nearly 3 inches taller and 2 inches wider than the standard issue Red Book, with more than three times the page count.

From the very first Guide Book in 1947, to the 68th edition in 2015, Whitman has used the same 7.75-inch by 5.25-inch wide covers, increasing only the number of pages as the years have passed. It has remained easy to use, whether at home or on the coin bourse.

Portability, however, is the enemy of comprehensiveness. To stay compact, the Red Book had to omit thousands of details about every series of U.S. coins.

Therefore, if you get serious about collecting, say, early quarter dollars, you need to buy more in-depth references. For example, Ard W. Browning’s The Early Quarter Dollars of the United States 1796-1838, which provides information on relative rarity, die varieties, and illustrative photographs, must be added to your library.

Often, though, such specialized references are intimidating to the novice collector, complicated to use, difficult to find, and sometimes out of print.

Enter Mega-Red, which includes a novice-collector-friendly specialized reference book for every American coin series. Take large cents: the 2015 Red Book offers a respectable 15.5 pages on the big coppers dated 1793 to 1857. Mega-Red devotes a whopping 267 pages: literally a book within a book!

For each year, full color obverse and reverse color photos introduce compelling commentary on the cent’s history, rarity, and major varieties. Will this replace the standard large cent references?

No, but it will provide a bridge for the novice to cross on the way to becoming an expert. And this, remember, describes only the large cent series.

Mega-Red’s back cover tells “the tale of the tape” of this new undisputed heavyweight champion of coin reference books: 8,018 items priced; 50,205 individual values; up to 12 grades; 5,750 full-color images; 16,000 individual auction records. You can still take the Red Book to your local coin show, but you need Mega Red for deeper reference on your home bookshelf. The Deluxe Edition is an entire numismatic library between a single set of covers.