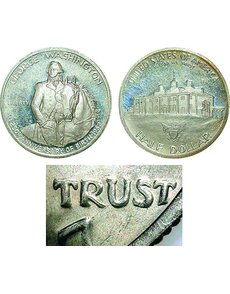 Searching through rolls of United States half dollars has yielded quite a number of coins containing silver, including a circulated 90 percent silver Proof 1982-S George Washington 250th Birth Anniversary commemorative half dollar. Kennedy half dollars included pieces with doubling on the motto, right.

Writing about my finds and sharing them with you is a huge part of the fun I have as I search through rolls, and since my column is now published only one time per month, each column will be chock full of as many finds as I can fit into the space allowed.

Searching through rolls of United States half dollar coins is one of my all-time favorite “Found In Rolls” activities and the number and categories of collectible coins discovered during the past month has been staggering. I’ve found commemorative coins, Proof coins, obsolete silver pieces and many rare doubled die varieties!

I will start by listing the silver half dollars that were found. The many 40 percent silver-clad composition pieces discovered included coins dated 1966 (one), 1967 (five), 1968-D (six) and 1969-D (four). Coins made of a 90 percent silver composition included a 1943 Walking Liberty half dollar, a 1962-D Franklin coin, two 1964-D Kennedy halves and a Proof 1982-S George Washington 250th Birth Anniversary commemorative half dollar. The George Washington half dollar was the first commemorative half dollar issued by the United States since 1954. It is also known, by collectors, as the first 90 percent silver coin produced by the United States Mint since 1964.

Finding silver in rolls is more than fun; it can be profitable. At the time of this writing, silver is hovering near the $40 per troy ounce mark, making this little hoard of silver worth about $160!

To say that I was amazed to find all those Proof coins in machine-rolled boxes of half dollars is an understatement! I couldn’t believe it, but there they were!

In addition, coins struck by doubled dies were plentiful! While most roll searchers carefully examine 1974-D Kennedy half dollars for that fairly well known doubled die variety, many others in the series are often overlooked. It is fair to say that I don’t miss any of them.

The “pick up point” on most of these die varieties is similar to that of the 1974-D DDO. Look at the motto and check the words we trust for distinct doubling! Look too, for clear separation of the doubled letters and strong notching on the serifs of the w of we.

Please share your finds by going to www.askaboutcoins.com and using the Submit Question button!