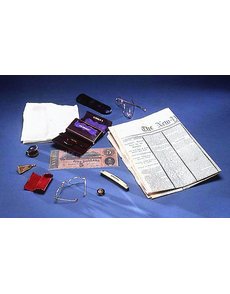 Among the items in President Lincoln’s wallet when he was assassinated was a $5 Confederate note, shown here in a Library of Congress display.

In the numismatic world, we think of “provenance” as the ownership history of a valuable coin, such as the Mickley-Hawn-Queller Class I 1804 Draped Bust silver dollar graded Proof 62 that sold for $3.74 million in 2008.

Heritage Auctions, which offered the coin, described its “long and historic provenance that extends back to noted 19th century collector Joseph J. Mickley.”

What would you say if I claimed that “everyday” provenance — ordinary pocket change and paper currency — can be worth far more than any Class I 1804 dollar, at least figuratively, and priceless to the owner?

How much would you pay for a worn $5 Confederate note? Perhaps $25 on eBay?

How much would you pay for the one in Abraham Lincoln’s wallet when he was assassinated April 14, 1865? It’s not for sale. The priceless note, along with other possessions in his pockets, is archived in the Library of Congress, where it will remain.

Some everyday items are associated with famous occasions.

Ordinarily, a heavily environmentally damaged 1936 Winged Liberty Head dime with a graffitied reverse would be worth only face value.

Such a dime was taken by astronaut Gus Grissom on the second manned U.S. space flight, July 21, 1961. Bolts on his Liberty Bell 7 Mercury spacecraft exploded on splashdown, sinking the craft in the Atlantic Ocean. The capsule was recovered July 20, 1999, and one of 52 dimes found within was auctioned by Heritage Nov. 17, 2010, fetching a realized price of $3,858.

That was a bargain.

Personal everyday provenance can be priceless, too, at least to family members or loved ones. For instance, coins from a fallen soldier’s pocket are handed down, generation after generation.

Included in an estate collection I recently appraised was a coin bracelet of ordinary foreign and U.S. coins, but representing cities visited by an airline steward from Iowa.

I have my own collection of everyday personal provenance, including two Kennedy copper-nickel clad half dollars left to me by my mother along with other coins; a $2 “good luck” note from my father; my first coin shop purchase, an 1884 Indian Head cent; an 1864 Nova Scotia cent marking a 2001 family vacation; and a 1925 Stone Mountain Memorial commemorative half dollar from my grandfather.

My most recent addition is a Ulysses S. Grant Presidential dollar that was in my pocket while I was sworn in on July 26 as a member of the Citizens Coinage Advisory Committee. I had several in my pocket that I had purchased from the U.S. Mint lobby kiosk, and I gave one each to my sons and the rest to youth members of the Ames (Iowa) Coin Club.

You can share your own such treasures with friends or perhaps fellow collectors in the Letters section of Coin World to show the value of everyday provenance.

Michael Bugeja, a coin collector since childhood, is a professor at Iowa State University and also serves as president and Webmaster of the Ames (Iowa) Coin Club. He is a nationally known author, journalist and educator.