Everybody plays the fool: What not to do when buying coins 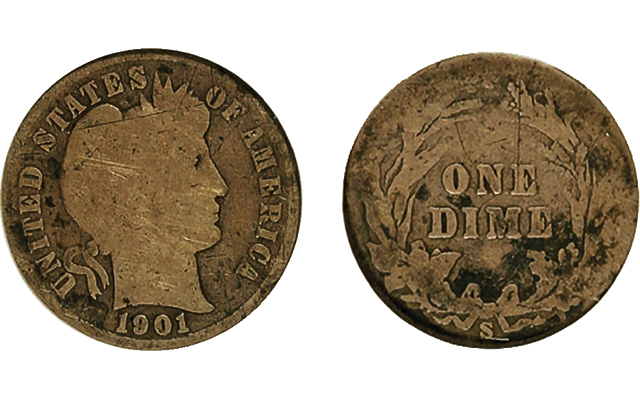 A 1901-S Barber dime in a low grade, such as this one graded About Good 3 Details, Scratched, Corroded, by ANACS may not be the bargain it seems if it doesn’t bring its buyer pleasure.

For those of you who recognize the title of this Guest Commentary as a song about when relationships go bad, it can also be applied to coin buying. Having heard and even preached all of the old collecting adages at least twice, I am at an age where I thought my rookie mistakes were behind me, but apparently that is not the case.

At a recent show, I had a judgment lapse and purchased some coins that were real dogs. How bad were they? Let’s just say that I thought they both graded Very Good 10’s and they came back as K-9’s. After establishing my registry set with the American Kennel Club, I sat down and thought about what went wrong. So, with an acute case of buyer’s remorse, a slightly bruised ego, and a lighter wallet, I will now share my transgressions with you, in hopes that unlike this fool, you and your money will not soon be parted. Here is what not to do when attending a coin show:

(1)?Do not have a plan. Sure, there’s the saying about no battle plan surviving first contact with the enemy anyway, but at least go in with some idea of what you would like to accomplish. I didn’t have a real plan until just before leaving for the show, when the idea of buying 1901-S and 1903-S Barber dimes came to me like an epiphany on a remote, mist-shrouded mountaintop.

(2)?Buy the first example you see of a coin that’s on your list. I was probably two minutes and 20 feet into the bourse floor when I made my first purchase — the 1901-S dime. Now, I know there comes a time when as a collector you occasionally see a rarity you’ve been chasing for a while and you have to pounce on it right away. A low grade, flawed 1901-S Barber dime would not constitute a true rarity nor require any degree of pouncing. Had I looked around without my glasses and my good eye closed, I would’ve mostly likely found a nicer example of this coin.

(3)?Buy the lowest grade, lowest priced example of the coin you can find. I have advised others to buy the best example they can afford and did the complete opposite, settling for an inferior example with the eye appeal of a smoldering campfire. I can only attribute this to subconsciously making sure I had some money left over to treat for lunch at our annual stop after attending the show in question.

(4)?Focus on only one detail. Or, if you will, go stand very close to a forest. That was me — so close I couldn’t see the trees, or the rim nicks, cuts, and ugly toning that must have come from being caught in the great conflagration of 1906. In focusing only on the headband details, I was able to make out the “E” and “R” of the word “LIBERTY,” or was that “Sucker”?

(5)?Don’t make the same mistake just once. With the first of my bad buys in hand I walked the rest of the floor and glanced at another table that, lo and behold, had a low grade, flawed example of the 1903-S Barber dime, which I quickly purchased. Go ahead and laugh, but there’s something to be said for consistency.

There you have it, what I did wrong and what hopefully you will avoid doing. These mistakes have not soured me on collecting. If anything, they have served as a reminder and inspired me to be more discerning with future purchases. As to the fate of the two dimes, I didn’t even want to look at them anymore, and they are now ensconced in the “Uncle Todd’s Home For Wayward Coins” collection of my 6-year-old nephew. Right now he thinks it’s great that I gave him some old coins for his growing collection. Wait until he learns how to properly grade.

Oh, and to cap it all off, I missed the exit for our ritual post-show lunch spot.