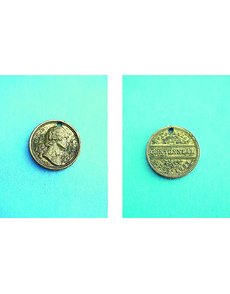 A gilt medalet was struck in 1883 to commemorate the 100th anniversary of Evacuation Day in New York City. This example was holed post-strike, likely for use as a necklace pendant.

I’m looking for some information on this piece. It is a small (possibly gold) medal, with a half-inch diameter and its weight is 1.1 grams. On the reverse it is inscribed evacuation day centennial 1783-1883. On the obverse is a portrait of either Thomas Jefferson, Benjamin Franklin or George Washington and the inscription god and our country.

Based upon Mr. Bassett’s written description, the piece in question may be a medalet issued upon the 100th anniversary of the evacuation of British soldiers from New York City on Nov. 25, 1783.

The obverse actually depicts George Washington, who rode with his troops into the city after the last British soldiers had boarded ships leaving the city. The British had occupied New York City since late 1776 during the American Revolution.

According to a New York Times blog article by Sam Roberts on the 225th anniversary of the event in 2008, Evacuation Day was celebrated annually by New Yorkers for more than a century until it fell out of favor after World War I, pushed aside by America’s alliance with Great Britain during the “Great War,” as well as the nationwide celebration of Thanksgiving, which falls on or close to Nov. 25 every year.

Roberts also writes: “Departing British troops nailed their flag to a pole downtown and greased it. Every November, a descendent would re-enact the legendary feat of John Van Arsdale, a sailor, who donned cleats and shimmied up the flagpole to replace the British colors with the Stars and Stripes.

“As George Washington triumphantly proceeded Downtown, jeering Americans on Staten Island were fired upon by a British ship in what has been described as the last shot fired in the war.”

The medalet celebrating the 100th anniversary was issued by George B. Soley, according to Russell Rulau and George Fuld’s book Medallic Portraits of Washington. Soley was a Philadelphia diesinker and likely used a steam press formerly owned by the U.S. Mint to make this medalet and a number of other pieces attributed to him. Rulau and Fuld give this medalet an identifying number of 464 and a rarity rating of 3, meaning it is a somewhat common piece, with an estimated 500 to 1,999 pieces produced. In Extremely Fine condition, Rulau and Fuld give it a value of $7.50; in Uncirculated condition, $10.

As opposed to being gold, the piece is actually described as being gilt, meaning it has a gold-colored surface but is composed of base metals.