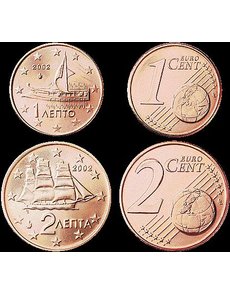 The two smallest denominations of euro coins, the 1- and 2-cent pieces, may be withdrawn because of production costs. A new study released by the European Commission outlines four scenarios for the coins, which feature different obverse designs by country. The 1- and 2-cent coins of Greece are shown.

Making cents is not making sense for many mints, calling in to question the fate of the two smallest coins of the euro denomination.

By volume, the 1- and 2-cent euro coins are in demand, but their value doesn’t match their cost, according to a May 14 European Commission report outlining four possible scenarios involving the 1- and 2-cent coins.

The two euro coins could (options 1 and 2) be withdrawn altogether (either quickly or over time), (3) be struck from new alloys or with other cost-saving efficiencies, or (4) European mints could continue to issue the coins as they do currently while losing money.

Since the euro launched as a replacement currency for 12 nations on Jan. 1, 2002, nearly 46 billion 1- and 2-cent euro coins have been issued, a 74 percent increase from the initial amount prepared for the switchover. That volume is equal to 137 coins for each of the approximately 332 million eurozone residents.

All circulating examples combined have a face value of €714 million (about $921 million in U.S. funds).

Producing those coins has cost issuing authorities €1.4 billion (or about $1.8 billion U.S. in current funds) in negative seigniorage, the difference between actual costs and face value.

The report doesn’t identify at what point production costs eclipsed face value, and none of the world mints that strike the coin have released that information, either.

Cost concerns were the reason cited in 2004 when the Netherlands joined Finland in the small group of nations where the coins are not released for circulation. In those nations, prices are rounded to the nearest 5-cent increment for cash payments.

The 1- and 2-cent coins represent a psychological paradox. Members of the public are attached to the little coins and worry about inflation if they were to disappear. However, users don’t value them enough to recirculate them, causing demand for the coins to be so great as to represent nearly half of all new coins minted and issued in the eurozone.

If, as in one of the scenarios outlined in the report, European mints simply stopped striking and issuing the two smallest denominations, the coins could disappear from circulation altogether within three to four years, according to the study. That is a slow way to bid the small denomination coins farewell.

Another option laid out in the study was a rapid switch, where the coins would only actively circulate and remain legal tender for a short time. That scenario would resemble the so-called “big bang” approach to the 2002 adoption of the euro, which permitted the co-circulation of the new euro coins and the legacy coinage for limited periods of time before the legacy coins were withdrawn, and has been a model ever since as the eurozone expanded.

The eurozone, which originally had 12 member nations, now totals 17 countries.

In addition, several smaller nations in Europe, including Vatican City, use the denomination due to currency agreements with legacy nations.

A bit more than one in five eurozone residents find it easy to confuse the 1- and 2-cent coins, according to the latest EU Barometer poll coordinated by the European Commission, which was published in December. One-third believe there are too many denominations; in both groups of respondents, the 1- and 2-cent coins are cited as most problematic. In that same poll, some 88 percent said the 1-cent coin should be withdrawn, with 82 percent expressing that sentiment for the 2-cent coin.

The commission prepared the May 14 study in response to a request from the European Parliament and the Council of Ministers in 2012 to review the cost and public acceptance of all denominations of euro coins and paper money.

The commission consulted business and consumer associations, treasuries, mints and central banks on the pros and cons of continued issuance of the 1- and 2-cent coins, said Olli Rehn, commission vice president for Economic and Monetary Affairs and the Euro, according to a press release from the commission.

The commission will now consult with people involved in producing, distributing and using the coins about which of the four cited options they would prefer. “Should a clear preference emerge, the Commission will come forward with the necessary legislative proposals,” it announced.

Several countries in the eurozone have experienced financial troubles in recent years, including Greece, prompting speculation that some member nations might consider pulling out of the currency union and returning to some form of legacy currencies. However, so far, none of the eurozone members have announced any withdrawal from the union.

The euro coins and notes can circulate anywhere in the eurozone. ¦