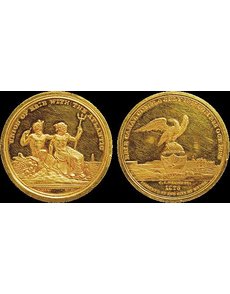 Originally presented to President John Quincy Adams while in office, this 1826 gold medal recognizing the completion of the Erie Canal brought $156,000 at auction Oct. 28 in Boston. 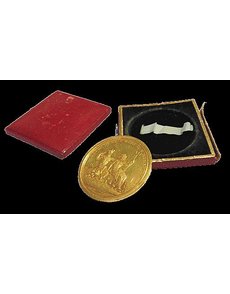 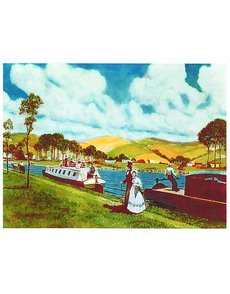 Pre-1952 painting by Carl Rakeman, while an employee of the federal Bureau of Public Roads, captures the Seneca Chief, the flagship of the 1825 flotilla that made the maiden voyage down the 363-mile-long Erie Canal from Buffalo, N.Y., to New York City.

The 1826 so-called dollar medal celebrates the completion of the Erie Canal, which took more than eight years and $7 million to construct. The canal connects the Great Lakes to the Atlantic Ocean.

Massachusetts dealer Stuart Levine acquired the medal in the auction. He told Coin World Oct. 30 he was thrilled with being able to acquire President John Quincy Adams’ presentation piece.

“It’s one of only two examples in private hands,” Levine said. “I knew I wanted to own it.”

Levine says he hasn’t yet decided what he plans to do with his latest purchase.

Offered by Skinner Inc., a Boston auctioneer, the Adams presentation piece carried an estimate of $30,000 to $50,000.

The lot description did not include any grade referencing condition, other than to note six rim dents or dings.

Adams’ medal was consigned to the Skinner auction by a direct descendant of the sixth president, according to firm officials. Skinner officials would not identify the descendant.

The medal, along with other personal items belonging to the president that were offered in the Skinner sale, apparently had been kept in a shoe box in the attic of the descendant’s home, according to a Skinner spokesperson.

The Oct. 28 Skinner offering was only the second time since 1925 for one of the gold versions to be offered at public auction.

The medal was certified Extremely Fine 45 by Numismatic Guaranty Corp.

Collectors consider the 44.5-millimeter medal, weighing 43.67 grams, to be part of the so-called dollar series of medals. The medals are often the size of a U.S. silver dollar in diameter and commemorate a national, state or local event.

It is one of 11 of the 1826-dated medals struck in gold for presentation to “dignitaries of the highest order” by the Common Council, City of New York.

Although the Hibler-Kappen reference states that 51 gold medals were struck, the Heritage Auctions cataloger for the sale of the gold 1826 Erie Canal Completion medal in 2007 located a contemporary source indicating the number was 11.

“Several hundred” of the 1826 Erie Canal Completion so-called dollars were also struck in silver and in white metal, the latter sometimes called pewter by catalogers. These medals have the same diameter as the gold medals.

The Hibler-Kappen reference suggests that many of the silver and white metal medals were distributed to guests and dignitaries at various celebrations along the canal route, while the gold medals were reserved for “crowned heads of the world and eminent men.”

The Heritage auction cataloger cited an extract from the formal resolution terminating the Grand Canal Celebration, which appeared in the Nov. 29, 1826, edition of the Buffalo Journal.

According to the Buffalo Journal article, gold medals were approved to be distributed to:

??The family of George Washington, with the presentation case constructed of maple brought aboard the Seneca Chief, the first canal boat on the newly opened waterway.

??The three surviving signers of the Declaration of Independence — John Adams from Massachusetts (father of John Quincy Adams), Charles Carrollton from Maryland and Thomas Jefferson from Virginia.

??Lafayette, the last surviving major general of the Army of the Revolution.

??The senior living officer of the Navy of the Revolution. The Buffalo Journal article does not identify the officer by name.

??The family of Robert Fulton, in memory of his contributions to steamship travel.

??Cadwallader D. Colden, a former New York City mayor (1818 to 1821), on the occasion of his memoir, commissioned during the final days of the canal’s construction.

The Heritage auction lot cataloger suggested the example offered in 2007 could possibly have been the medal originally presented to Lafayette. The medal had been repatriated from a European source, possibly France, for the Heritage auction.

The Nov. 16 to 18, 1925, auction by Anderson Galleries of the collection of the late Montreal collector W.W.C. Wilson offered the gold medal that had been presented by the City of New York in 1827 to Andrew Jackson.

The sale was cataloged by noted numismatist Wayte Raymond.

According to H. Joseph Levine (no relation to Stuart Levine) of Presidential Coin & Antique in Clifton, Va., the Andrew Jackson gold medal was housed in its original red morocco leather case.

Its round case — with cream silk satin and blue silk velvet interior — is embossed MAJ. GEN. ANDREW JACKSON 1827 in gold letters on its lid.

The Jackson medal is now the property of the New-York Historical Society.

According to the NYHS website at www.nyhistory.org/, the gold medal presented to Jackson sometime in 1827 was donated to the NYHS in 1932 by a Miss G. Wilbour.

Jeff Shevlin, executive director of the American Numismatic Association and a specialist in so-called dollar medals, said the “official” large format book limited to a printing of about 200 copies details the entire Erie Canal Completion project.

Shevlin said the book, Colden’s Memoir, Prepared at the Request of a Committee of the Common Council of the City of New York, and Presented to the Mayor of the City, at the Celebration of the Completion of the New York Canals, itself is a significant numismatic literature rarity.

Free digital copies of the canal book can be downloaded from the University of Pittsburgh Library link at http://archive.org/details/memoirpreparedat00cold.

The book includes copies of original correspondence, including a May 23, 1826, letter from John Quincy Adams to the City of New York acknowledging receipt of “medals,” although not indicating which composition.

The publication also publishes a June 27, 1826, letter to the city from Lafayette addressing his appreciation for being recognized as the sole living major general of the Revolution.

The medals were struck by New York silversmith Maltby Pedetreau, according to the Hibler-Kappen reference.

The obverse features two seated figures depicting Pan and Neptune, with a cornucopia to Pan’s right. The sea and a lighthouse appear in the background.

Robertson’s reverse features the New York State coat of arms at center. To the left is a section of the canal, and to the right, a sailing ship, with a distant view of the City of New York in the background.

Officials and businessmen had long considered constructing a water route from the Atlantic Ocean to the Great Lakes since no natural navigable route existed. Transportation from the Atlantic to the four westernmost Great Lakes was impeded by the great falls at Niagara, between lakes Ontario and Erie. National expansion westward and a growing population made such a route increasingly desirable, for reducing transportation costs and encouraging economic growth.

However, President Jefferson had rejected a proposal to build a canal as “a little short of madness.” Support for financing the canal construction was later found among New York businessmen and politicians. The New York Legislature authorized the Erie Canal Commission in 1810.

Ground was broken for the canal at Rome, N.Y., on July 4, 1817, on behalf of the Erie Canal Commission. DeWitt Clinton, a member of the commission and later New York governor, served on the commission without pay for 10 years.

When completed, the Erie Canal stretched 364 miles from Buffalo on Lake Erie to the Hudson River north of New York City.

Construction of the canal was a monumental task. It required the construction of dozens of locks over an elevation of nearly 600 feet from the Hudson to Lake Erie, and 32 aqueducts.

Aboard his packet boat Seneca Chief, Gov. Clinton traveled the canal, arriving in New York City on Nov. 4. A “water parade” of vessels accompanying Clinton stopped for celebrations along the way.

Transportation between the East and the western environs became faster and easier, and transport costs dropped 95 percent.

By 1836, tolls charged to marine vessels traveling the Erie Canal were sufficient to retire the construction debt, according to the New York State Archives website at www.archives.nysed.gov/. ¦