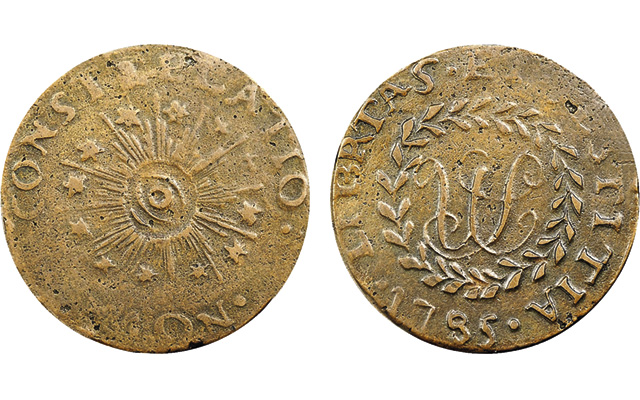 This unique contemporary imitation of a 1785 Nova Constellatio copper sold for $7,050 at Heritage’s Nov. 14 auction of the Newman Collection.

Nova Constellatio coppers are listed in A Guide Book of United States Coins under “Speculative Issues, Tokens, and Patterns.” These pieces are dated 1783 and 1785, do not clearly state a denomination on either side, and were struck in large quantities in Birmingham, England. They circulated widely in New York and are well-loved for their all-seeing eye on the obverse. The simple design has made it popular with generations of collectors including St. Louis’ Eric P. Newman.

Here is one of three Coin World is profiling that sold at Heritage’s Nov. 14 and 15 auction of selections from his collection.

The story: During the late 18th century, individuals produced counterfeits of issues that were circulating as money in the United States.

This imitation Nova Constellatio copper was produced on a cast planchet at around the same time as the production of real Nova Constellatio coppers, thus it’s called a contemporary imitation copper. As Newman wrote in the mid-1990s, “The counterfeit 1785 Nova Constellatio is much cruder than the 1786 pieces. The 1785 counterfeit maximizes errors by omitting the E in LIBRTAS, by having only 12 sets of rays and 12 stars, by the leaf stem joinders pointing counterclockwise instead of clockwise and by having two stops after the word CONSTELLATIO and before the word NOVA. Its style indicates American manufacture.”

Heritage confirms that it is a unique piece and that there is nothing currently known that it could have been copied from. Although the design elements are a trifle weak, and the olive-brown surfaces show microscopic granularity, a pleasant steel-blue overtone appears on both sides.

Read the rest of the "Newman's Novas" Market Analysis: