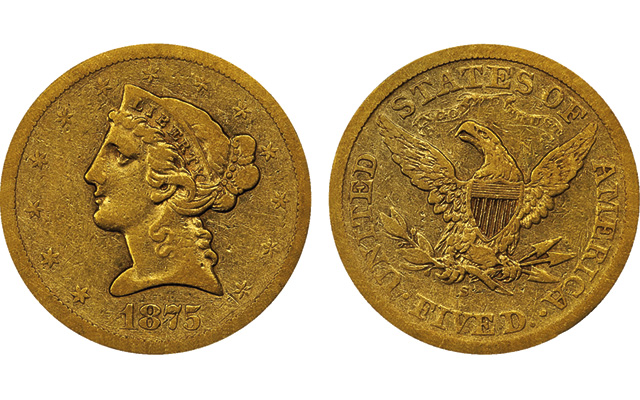 The story: Collectors who think that famous collections have only top-quality coins need only look at this example to see how even great collectors have coins that may be described as a filler piece.

This 1875-S Coronet $5 half eagle graded Very Fine 25 by Numismatic Guaranty Corp. brought $1,292.50. It’s a scarce issue, with a low mintage of 9,000 pieces, of which an estimated 100 to 150 are known today. Heritage notes that “this example is moderately abraded but displays lively, medium-gold surfaces and surprising amount of underlying flash.”

While comparables are scarce at auction for a thinly traded issue like this in an unusual grade, this piece sold for what may have been expected, considering that Heritage sold an example graded NGC VF-20 in 2011 for $1,035, and last year Heritage auctioned one graded Extremely Fine 40 for $2,585. That the Newman piece brought slightly more than the VF-20 piece while selling for less than the EF-40 piece could be expected, even with the bonus of a Newman provenance.