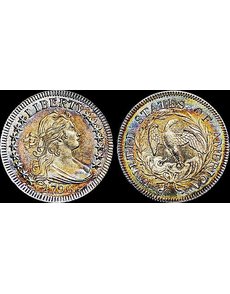 When Eric P. Newman began collecting coins at age 7 after his grandfather handed him an 1859 Indian Head cent, the United States was embroiled in World War I. Today, the 102-year-old numismatist is selling off portions of a remarkable collection he has assembled since 1918.

In 2013, Newman selected Heritage Auctions to auction portions of his collection, with the proceeds going to the Eric P. Newman Numismatic Education Society in Saint Louis. All of the coins were slabbed by Numismatic Guaranty Corp., with a special Newman Collection label.

Heritage conducted two Newman auctions in 2013. The first was a 159-lot offering focusing primarily on U.S. pattern pieces in April in Illinois; it realized $4,087,743. The second auction was an approximately 1,800-lot selection of U.S. coins in November in New York City; prices topped $23 million.

Many of the coins were previously in the collection of Col. E.H.R. Green; Newman acquired these pieces from the Green estate in the 1930s and late 1940s. Most of the coins in the Newman Collection, no matter their origin, had been off the market for decades.

The price highlight of the first auction was an 1852 Humbert gold $10 piece (graded Mint State 68, with a green Certified Acceptance Corp. sticker) that realized $1,057,500. Heritage cataloged it as “the finest business strike California gold coin of any maker.”

Leading off the second auction in terms of price was a 1796 Draped Bust quarter dollar graded Mint State 67+ ?, with a green CAC sticker. The coin, called by the cataloger “the most beautiful American silver coin that exists today,” realized $1,527,500.

The second sale also offered coins for collectors with much more modest budgets but who wanted a coin with a Newman pedigree. The least expensive coin was a Proof 65 1953 Washington quarter dollar that brought $53. ¦