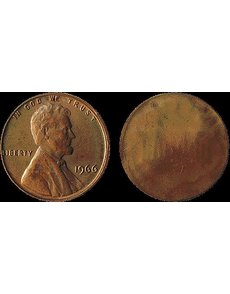 The featureless reverse face of this in-collar uniface strike on a 1966 Lincoln cent makes an inviting target for individuals seeking to add a raised or incuse design. 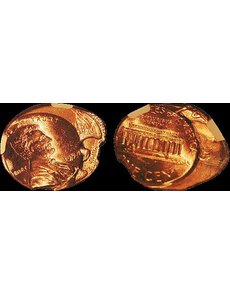 The thicker, unstruck portion of this off-center 1994 Lincoln cent had a quarter dollar design pressed into each face outside the Mint. 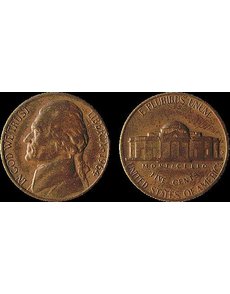 Weighing only 3.88 grams, this 1964-D Jefferson 5-cent coin may have been struck on a bizarre planchet composed of copper-plated copper-nickel. Alternatively, the copper plating may have been applied outside the Mint to an ordinary rolled-thin error.

Enhanced errors are genuine error coins that have been modified outside the Mint to resemble more exotic and valuable errors.

Broadstrikes (oversized coins that have been struck out-of-collar) are very common and inexpensive. “Squeeze jobs” — coins pressed against one coin or between two coins — are crude alterations that are easily spotted.

But combine the two and you can occasionally escape the scrutiny of the pros. A few years back I saw a broadstruck 2000-D Lincoln cent that had been squeezed between two other cents. A top-tier grading service had encapsulated it as “brockaged, then broadstruck.”

An error coin that presents a featureless surface on one or both faces invites attempts to decorate the blank surface. Shown here is a 1966 Lincoln cent with an in-collar uniface strike. The reverse face is featureless from having been struck against an underlying planchet. An enterprising criminal could simply squeeze the obverse face of another cent into the reverse face while the obverse face of the 1966 cent rests against a supporting surface composed of hard wax or leather. The resulting false brockage would convert a $75 error into one that resembles a $1,000 error. The normal weight and finned obverse rim (an indicator of increased striking pressure) would complete a convincing picture. I have personally examined one fake brockage of this type.

In the case of an off-center uniface strike, the featureless side of the struck tongue can be pressed into another coin or a fake die. You can, for example, create a false dual-denomination brockage by pressing a dime into the featureless surface.

The unstruck portion of an off-center coin is also an obvious target for modification. Shown here is an off-center 1994 Lincoln cent encapsulated by a major grading service as “struck off-center on a planchet brockaged by 25c.”

Any protruding portion of an error coin can be broken off and peddled as a struck fragment. These include the protruding tongue of coin struck way off center and the “stem” of “mushroom strike.” Struck out of collar, a mushroom strike is a coin that has split on either side of an indent or partial brockage.

Coins struck on planchets that are cracked or split can also be enhanced by breaking off pieces. In the case of a clad coin with a clamshell separation of one clad layer, that clad layer can be bent back and forth until it breaks off. The separated partial clad layer can then be marketed in any number of ways. It could, for example, be described as a uniface strike on a clad layer with a straight clip. Clamshell splits on solid-alloy coins can be modified in a similar way.

A wedge can be forced into a coin struck on a cracked planchet so that the crack widens and lengthens enough to break the coin in two. The two halves can then be sold together or separately under a wide range of descriptions. Each half could be labeled as a “struck fragment,” for example.

An underweight coin is also an easy target for manipulation. Shown here is a 1964-D Jefferson 5-cent piece struck on an underweight (3.88 grams) planchet (normal weight is 5 grams). The planchet is composed of copper-plated copper-nickel, a strange composition that isn’t used by any country. It could be genuine (I certainly hope it is). The year 1964 produced a plethora of weird off-metal errors. However, I cannot rule out the possibility that the copper plating was applied outside the Mint to an ordinary “rolled-thin” error. These are coins struck on planchets that are punched out of strip that is rolled too thin.

You can also add weight to enhance the value of an error. I have in my collection a bonded pair consisting of a tall obverse die cap bonded to a cent struck in-collar. Originally, a third cent had been glued to the underside of the bottom cent in order to make it resemble a bonded trio.