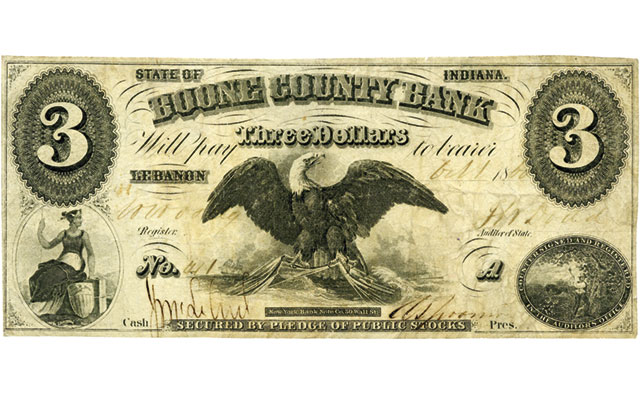 The less than squeaky-clean reputation of note printer and designer W.L. Ormsby was one of the reasons behind the short life of the Boone County Bank of Lebanon, Ind.

I’ve always wondered about Waterman Lily Ormsby. He was the “renegade bad boy” member of the bank note engraving community and was always considered an outsider.

Ormsby had a knack for being involved with banks and bankers that weren’t “quite right.” Perhaps it was because he asked fewer questions of his prospective customers or was willing to work on thinner margins than the “big boys” in the bank note business.

In any case, the vast majority of his bank customers were either outright frauds or fragile short-lived ventures.

The Boone County Bank of Lebanon, Ind., was one such customer. W.L. Ormsby did notes for the bank under the name of the New York Bank Note Co. Contemporary documents and records document the deception that involved Ormsby.

The bank was organized Sept. 19, 1860, with A.W. Spooner serving as president and J. McLean as cashier.

The promoters appeared at the Auditor of State’s office in Indianapolis with a box containing $54,000 in unissued notes and an accompanying affidavit supposedly from Ormsby stating that the amount represented the total printed from the plates.

The next day the plates arrived at the Auditor of State’s office, having been sent there directly by Ormsby.

All’s right with the world, right? Well not quite.

It seems that the promoters had actually had $289,000 worth of notes printed. Before arriving at the Auditor of State’s office, Spooner and McLean removed $235,000 worth of notes from the box and substituted a forged affidavit, indicating the lower amount, in place of the original affidavit.

The bank’s legitimate circulation was released in Toledo, Ohio (the further away from home, the better the chances for a delay in redemptions), while some of the illegal notes, sporting forged signatures of the auditor of state and register, were put into circulation in neighboring Midwest states.

A letter from unknown parties in New York suggesting that something was odd resulted in the bank’s issues being thrown out by the Indianapolis banks.

A run on the bank quickly ensued that resulted in its failure.

While state officials exonerated Ormsby of any wrongdoing, he did admit that giving all of the notes to the bank’s promoters rather than sending them to the Auditor of State’s office directly (as the plates had been) was perhaps “poor judgment.”

Such lapses in judgment, whether unintentional or planned, perhaps explain Ormsby’s attraction as the printer of choice for many of the shady operators engaged in the banking business before the Civil War.