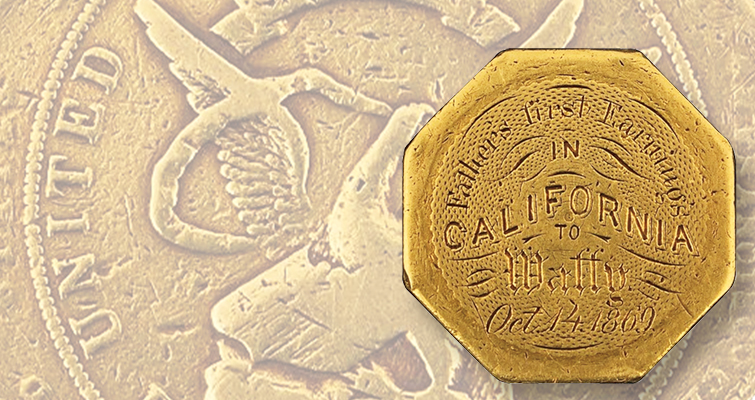 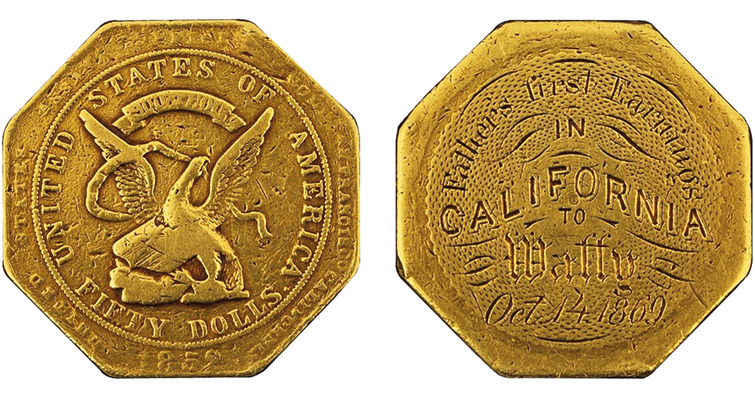 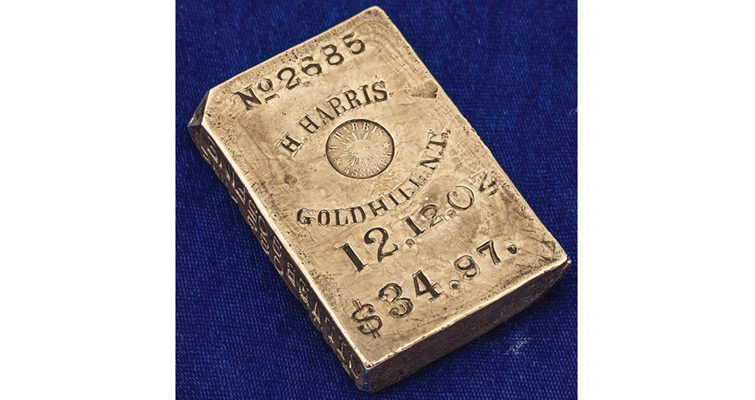 Harvey Harris silver ingot was produced from metal mined from Gold Hill in the Nevada Territory. 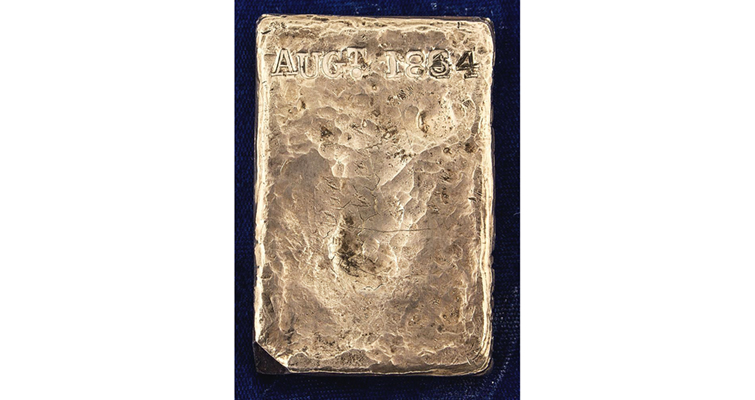 The back of the Harris silver ingot is stamped with the date of issue. 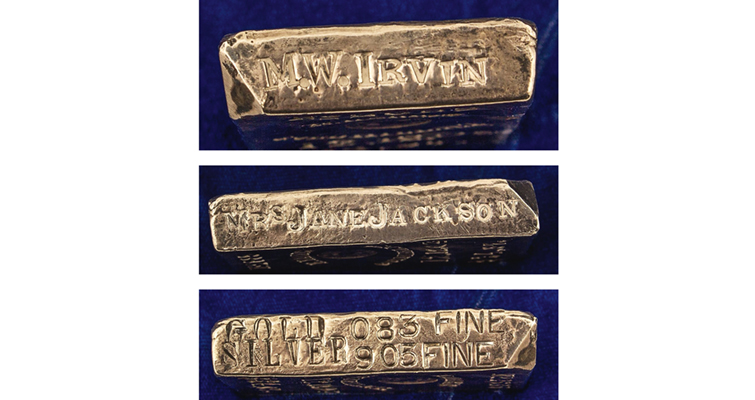 The Harris Gold Hill, Nevada Territory, silver ingot is stamped on three of its four sides with the fineness in gold and silver, along with the names of presenter and recipient. 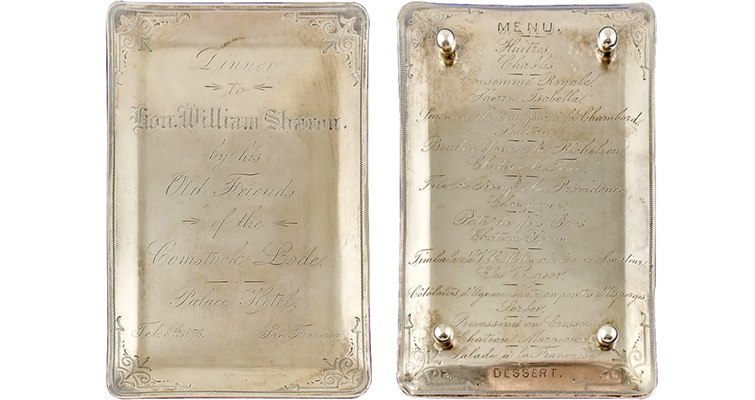 Engraved silver dinner plate ingot was presented in 1876 to U.S. Sen. William Sharon from Nevada by his "Old Friends of the Comstock Lode." 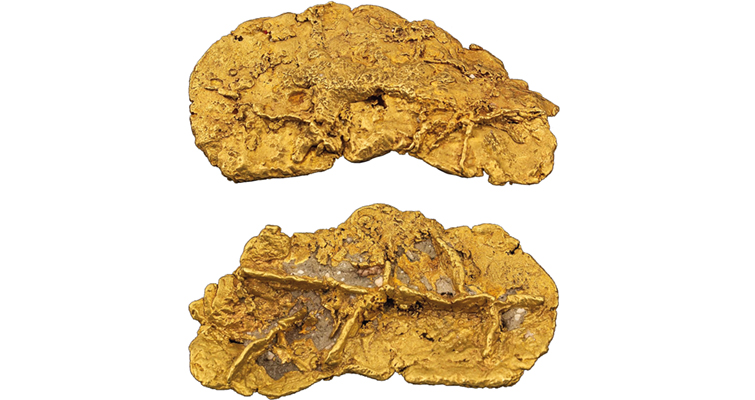 An engraved 1852 United States Assay Office of Gold $50 octagonal slug is among the highlights of the 1,443 lots of Cowboys & Indians & Miners collectibles to be offered May 13 and 14 by Holabird Western Americana Collections LLC.

According to Fred Holabird, the engraved gold slug is well-known among Gold Rush collectors. The knurled reverse is inscribed in six lines, FATHER's FIRST EARNINGS / IN / CALIFORNIA / TO / WALLY / OCT. 14, 1869.

The host coin is a 900 THOUS Reeded Edge variety cataloged as Kagin 14 by Donald H. Kagin in Private Gold Coins and Patterns of the United States.

According to Holabird, the Harris ingot is one of only two such ingots known bearing the "All-Seeing Eye" on its face between the inscribed H. HARRIS and GOLDHILL, N.T. The face of the ingot is also stamped with serial No. 2685, the weight as 12.12.OZ and value as $34.97.

The back is stamped AUGT 1864 at the top. Stamped separately on three of the edges are GOLD 083 FINE, below which appears SILVER 905 FINE; the presenter, M.W. IRVIN, who is reported to have been working in Gold Hill; and the name of the recipient, a MRS JANE JACKSON.

The ingot was fabricated by Harris, a California Gold Rush assayer who moved to the silver-rich Comstock region in 1862.

The 6.25-inch by 4-inch silver dinner plate ingot weighing 6.13 ounces was presented to William Sharon at a dinner fete in his honor Feb. 8, 1876, at the Palace Hotel in San Francisco. A total of 20 ingots were produced; the one in the Holabird sale is the example presented to Sharon.

The face of the ingot presented to Sharon is inscribed DINNER / TO / HON. WILLIAM SHARON / BY HIS / OLD FRIENDS / OF THE / COMSTOCK LODE / PALACE HOTEL / FEB. 8TH, 1876 SAN FRANCISCO.

Engraved on the back is the menu for the evening's meal. The ingot was professionally altered to act as a small tray with four small ball feet and raised edges.

Sharon was an Ohio lawyer who traveled to California in 1849 during the Gold Rush, making his way from Sacramento to San Francisco the following year.

He moved to Virgina City, Nev., in 1864 as manager of the branch of the Bank of California and became interested in silver mining. Sharon was a business partner of William Chapman Ralston, and was the Nevada agent for the Bank of California. Sharon and Ralston greatly profited by from loaning money to mining operations and then foreclosing on those operations when the owners defaulted.

Sharon acquired many of Ralston's assets in 1875 when Ralston's financial empire collapsed and Ralston took his own life. Among those assets was the Palace Hotel.

The 22.2-ounce gold nugget, with an estimate of $40,000 to $50,000, is from the original Dick Graves Nugget Collection at the Nevada Nugget Casino in Sparks. The nugget is described as a "large, flat crystalline gold piece with lengthy gold leafs and crystal agglomerates." 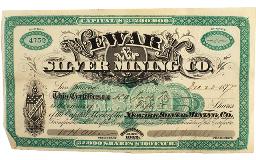 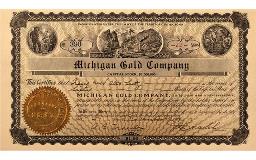