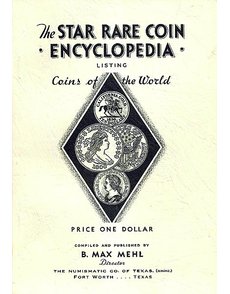 The Star Rare Coin Encyclopedia was a profit-spewing machine for its author, B. Max Mehl.

In the mid-1960s, when I began collecting, if you asked an established collector how he started in numismatics, chances were he would say, “When I ordered a Star Rare Coin Encyclopedia from B. Max Mehl.”

Sometimes, the collector would produce a small paper-bound book with a handsome cover illustration, by now much dog-eared with use. Occasionally, a collector would treat it like a holy relic, the “key to the kingdom” of collecting. And, for thousands from 1906 to 1959, it was.

For Mehl, director of The Numismatic Company of Texas, the Star was a profit-spewing machine. The Star Rare Coin Encyclopedia was such a potent money maker, and Mehl promoted it so heavily, copies remain common today.

If we examine a typical issue (58th, published in 1954), we quickly appreciate its magic. Its cover featured the charismatic 1804 Draped Bust dollar (for which Mehl offered a miserly minimum of $1,000, a price that coin had first achieved in the 1880s)!

Max stuffed bewildering variety into the Star’s 208 5-inch by 7-inch pages. Every conceivable U.S. coin was listed with offering prices, including such delicacies as gold ingots, compound interest notes and encased postage.

A series of 52 multiple-image plates illustrated the coins of Greece, Rome, most European, and some Asian nations.

But wait — there was more! Short essays included “The History of Money,” “U.S. $50 Gold Coins,” “The Glass Coins of China,” “The Coinage of Rome,” and “Coin Collecting for Profit.” But wait — there was still more: a teaser page of “Old U.S. Coins for Sale.”

Mehl offered, for only 10 cents, a 56-page retail coin catalog. The response was so enormous that he serially numbered every Star he ever published — the illustrated example is No. 430078B — and admonished customers: “When writing, be sure to enclose a self-addressed stamped envelope if you want a reply. Our mail is so large that the postage on replies would amount to a considerable sum, while the cost to you is but 3c.”

Page 116 warns customers, “Remember: Not all old coins are valuable. And not all valuable coins are old. Coins nearly 2000 years old may be purchased for as little as 50c, while half dollars minted in 1935 for Hudson, New York we pay $5.00 each!”

Such cautionary notes meant little to legions of starry-eyed people who hoped that the Star’s author would make them rich. That rarely happened, but B. Max Mehl’s The Star Rare Coin Encyclopedia did enrich the lives of thousands by leading them into numismatics.