Elongate cuds may be due to brittle die failure 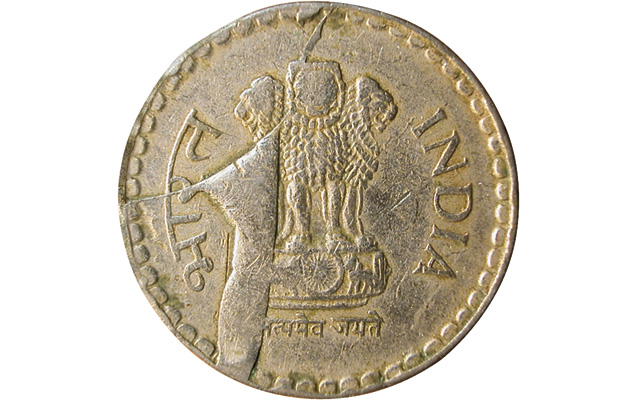 An elongate cud extends deep into the interior of a 1994 India 5-rupee coin. 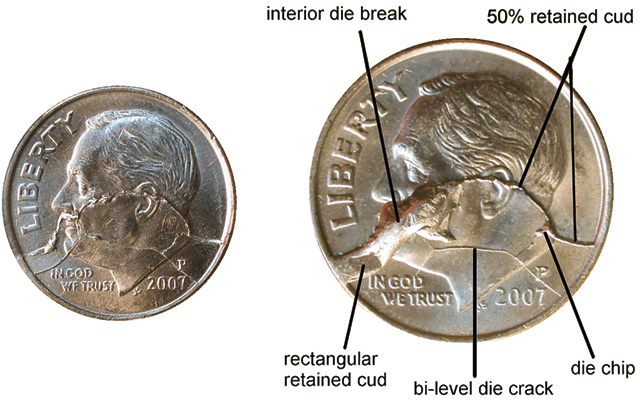 Die cracks and a 50 percent retained cud characterize Stage 1 (left) in the breakdown of this shattered Roosevelt dime obverse die. In Stage 4 (right image) a deep wedge of metal separated from the die face, producing a large interior die break. 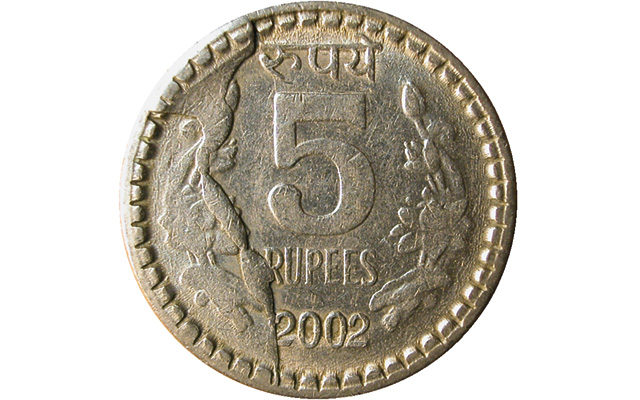 In this 2002 India 5-rupee coin, the apex of a triangular retained cud is extended as it meets a series of three contiguous, elongated die chips. 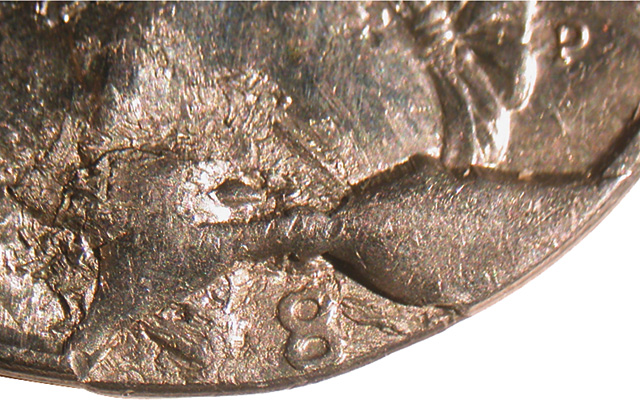 A dumbbell-shaped, rim-to-rim cud appears on the obverse face of a 1998-P Washington quarter dollar struck by a horribly damaged die.

A cud (marginal die break) occurs when a piece breaks off from the “corner” of the die face (where the die face meets the die neck). Cuds vary enormously in size and shape. Even so, the maximum distance any cud intrudes into the design is almost always less than its maximum width. It’s therefore quite unusual to find a cud that extends well into the design but that happens to be narrow where it meets the die’s edge.

An example of such an elongate cud is seen here on the obverse face of 1994 India 5-rupee coin. Shaped like the number “1,” the flared tip of the cud is defined by two sharp points connected by a slightly concave slope. The two points and the intervening slope are aligned with — and, in fact, complete — a rim-to-rim die crack that extends from 9:00 to 12:00.

The sides of the long, thin cud are relatively straight and roughly parallel. This feature, along with the cud’s aforementioned termination at a die crack, makes it likely that the cud was preceded by three intersecting die cracks that demarcated the area where a flake would later detach.

One or both of the two parallel die cracks might have angled down and in the direction of the facing die crack. When the propagating cracks met within the die neck, they would have generated a wedge-shaped flake that subsequently fell away, leaving an elongated void.

It’s also possible that a very thin flake lifted up from the area between the two parallel die cracks. Detached die fragments  can be surprisingly thin, as documented by a cud-bearing 1975-D Lincoln cent and its associated die fragment described in the May 20, 2013 column.

A somewhat earlier stage in the crack-induced formation of an invasive cud is seen here in a pair of 2007-P Roosevelt dimes struck by a shattered die. These two coins represent Stages 1 and 4 of a progression. The Stage 1 coin shows a 50 percent retained cud, within which lies a network of conventional and bi-level (stepped) die cracks. Several die chips have formed along the path of the retained cud, and one die chip straddles a subsidiary die crack. In the Stage 4 coin a large interior die break has swallowed up the lower half of Roosevelt’s face. The interior die break is connected indirectly to the edge of the coin by a rectangular retained cud. If this blocky die fragment ever fell out, we would be confronted with an impressive elongate cud.

It’s quite common for die chips to form along die cracks. This is not surprising, as the facing edges of the shallow crevasse in the die face are sharp and delicate. Arranged like irregularly-shaped pearls on a string, these die chips can enlarge and link up to form elongated die chips. On rare occasions a string of elongated, contiguous die chips can meet up with a pre-existing cud or simply connect to the die’s rim gutter. In this way you end up with another form of elongate cud that’s snake-like in appearance.

The process described above is illustrated by a 2002 India 5-rupee coin. The left side of the reverse face shows a rim-to-rim die crack (or possibly a retained cud) that extends from 6:30 to approximately 10:00. At least three elongated die chips straddle the die crack and connect end-to-end. They meet up with a triangular retained cud in the northwest quadrant. Were this triangular die fragment ever to fall out, we would have a sinuous, elongate cud.

While pre-existing die cracks probably lie behind the majority of invasive cuds, there’s no denying the possibility that some can form spontaneously or as the result of an impact. For example, an impact to the side of the die neck can theoretically drive off a flake in a fashion similar to how a flint-knapper knocks off flakes to create a stone tool.

A vertical or horizontal impact is undoubtedly responsible for the dumbbell-shaped rim-to-rim cud seen on the obverse face of a 1998-P Washington quarter dollar with catastrophic die damage. A rim-to-rim cud is an elongate cud taken to its logical extreme. The die break appears to overlie a retained cud since the last numeral of the date is displaced toward the south and is recessed relative to the rest of the design.