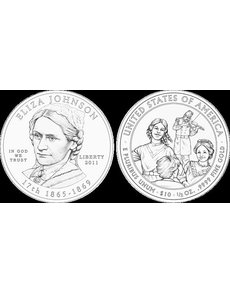 Line art shows the obverse and reverse designs for the 2011-W Eliza Johnson First Spouse gold $10 coins. Images of struck coins were not supplied by the Mint by press time.

Proof and Uncirculated versions of the 2011-W First Spouse half-ounce gold $10 coins and accompanying bronze medals will go on sale from the U.S. Mint beginning at noon Eastern Time May 5.

No more than 15,000 Eliza Johnson First Spouse gold coins across both Proof and Uncirculated options will be sold, according to Mint spokesman Michael White.

White said April 14 that pricing for the Eliza Johnson First Spouse gold coins will be based on the U.S. Mint’s pricing structure for precious metals coins, available at http://usmint/gov/catalog. The gold coin’s price will be set the afternoon of May 4, White said.

The bronze medals, struck at the Philadelphia Mint, bear the same obverse and reverse designs as the gold coins, except the medals are produced sans the obverse inscriptions in god we trust, liberty, the date and Mint mark, and without united states of america, e pluribus unum, $10, and 1/2 oz. .9999 fine gold on the reverse. ¦