Elixir for numismatic longevity is to learn something new 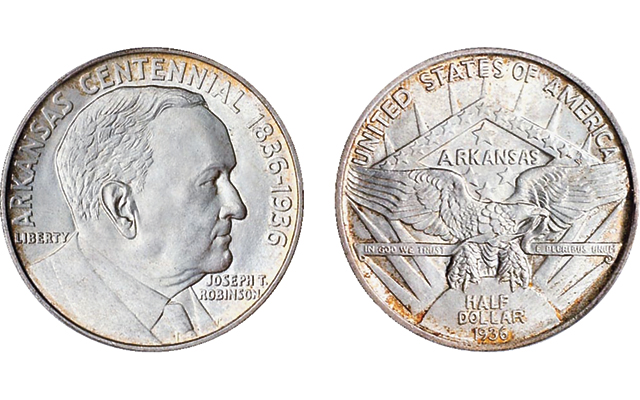 Can you imagine buying a 1936 Robinson-Arkansas half dollar like this from the official distributor, Stack’s, in 1936 and still having it?

As I write these words I am catching up from four trips, including two mentioned here.

In New York City, I spent time at Stack’s Bowers Galleries where my son, Andrew, is sales manager at 123 W. 57th St. Business is quite good, he said. One evening at dinner with staff and guests I was seated next to Mr. S., who bought his first coin from me when he was 14 years old.

Now, years later, he is successful in business and is a true numismatic connoisseur. He showed me a picture of his beautiful About Uncirculated Draped Bust dime, which has more eye appeal than some Mint State 62 and MS-63 coins I’ve seen. His secret is to start with the certified grade, and then, before making a purchase, to carefully examine the sharpness of strike, quality of the surfaces, and the eye appeal. By doing this he has built one of the finest collections of early 10-cent pieces ever formed.

I could not resist saying how wonderful the certification of coins is for the market. Probably 95 percent of buyers look only at the label. A coin that is as ugly as a toad, but certified as MS-63, will sell more readily to someone seeking high grades than will a gorgeous MS-62.

The wonderful part is that dealers have a strong market for the good, bad, and the ugly. A generation ago a coin had to “look nice” in order to sell.

Another advantage is that connoisseurs such as Mr. S. do not need to pay any additional amount when they find a high-quality coin. It is a win-win situation, unless you contemplate the logic.

From New York it was on to Tennessee to attend Lyn Knight’s Memphis International Paper Money Show — always a dynamic event. For Whitman Publishing LLC, my other employer, I gave a program on researching obsolete bank notes of the early 19th century, joined by Dennis Tucker and Caitlyn Mitchell who came from Whitman headquarters in Atlanta.

While at the show, I chatted with Mr. N., a longtime client. He has been collecting since 1933 and still has a 1936 Robinson-Arkansas commemorative half dollar he bought from Stack’s in 1936, which was two years before I was born!

Over the years he has had many specialties, always learning something new. That is the elixir for numismatic longevity.