Ejection impact doubling of 2000 fails to make a return 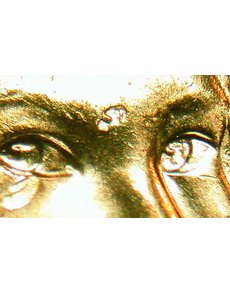 An extra iris and pupil from Sacagawea’s left eye (viewer’s right) is located right between the eyebrows in this 2000-P Sacagawea dollar. It represents a form of post-strike design transfer called ejection impact doubling. A second, nondescript area of damage is seen below Sacagawea’s right eye. 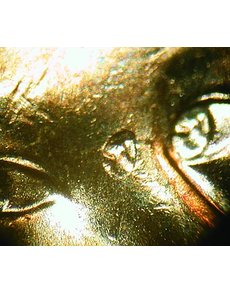 In this coin, the extra iris and pupil from Sacagawea’s left eye (viewer’s right) is located right between the two normal eyes. 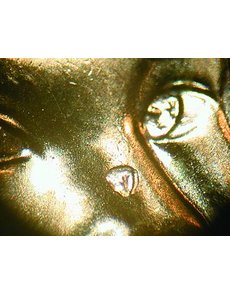 Not only is this “extra eye” located well down along the ridge of the nose, it is also rotated more than 90 degrees counterclockwise. A loose hammer die or vibrating coinage press could not be responsible for such dramatic lateral and rotational movements. 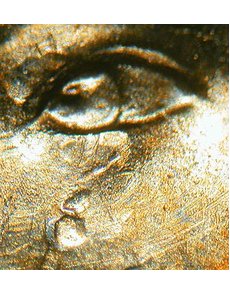 In this 2000-P Sacagawea dollar, the extra right eye is located beneath the left eye. 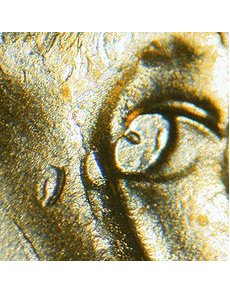 Two partial irises are located at the root of the nose in this 2000-P Sacagawea dollar.

Like a wayward comet, some minting mishaps appear suddenly and disappear quickly, never to return. They can even be quite common in the short period they’re with us.

Undoubtedly the briefest burst of activity recorded for a unique minting mishap is the emergence and disappearance of “ejection impact doubling” or EID. This phenomenon is restricted to Sacagawea dollars produced in the year 2000. All but one example are from the Philadelphia Mint and at least six different die pairs are represented among a subsample of 12 coins I examined for this purpose. These and hundreds of additional pieces were accumulated by small dollar collector Mike Clements.

Not a ‘Mint error’

I’ve intentionally used the phrase “minting mishap” because ejection impact doubling is not technically a “Mint error.” Although it arises from direct contact between coin and die, it occurs after the strike has been completed as a newly-struck coin is violently propelled into the face of the retreating hammer (obverse) die.

Ejection impact doubling leaves a few scattered die-struck design elements on the obverse face, the most recognizable of which is the disembodied iris and pupil from Sacagawea’s left eye (to viewer’s right, see photos).

The extra eye is usually located between Sacagawea’s eyebrows or along the bridge of her nose. However, it has been found as far away as her cheek. Double impressions of her right eye have also been observed (see photos).

When ejection impact doubling was first discussed in this column (Aug. 1 and 29, 2005), experts disagreed over whether it was merely a form of machine doubling or was, in fact, a novel form of post-strike design transfer. Machine doubling occurs immediately after the hammer die has reached the lowest point of its downstroke. The hammer die sometimes drags itself horizontally through the newly-struck design, smearing it to produce “slide doubling” (Collectors’ Clearinghouse, Sept. 13, 2010).

On other occasions, the hammer die bounces up, shifts laterally or rotates, and then lands lightly on the newly-struck design. Referred to as “push doubling,” this second form produces marginal shelving along the edges of affected design elements (Collectors’ Clearinghouse, March 15, 2010).

In the third and rarest form of machine doubling, the die bounces unusually high, shifts laterally (sometimes with a slight rotation) and lands lightly on the design rim, leaving an extra set of peripheral design elements. This subtype is designated “one-sided, rim-restricted design duplication” (Collectors’ Clearinghouse, May 22, 2011).

It is clear that ejection impact doubling is entirely different in cause and appearance from any form of machine doubling. The distance between the extra eye and its normal counterpart is much greater than any known example of machine doubling. Furthermore, the eye is sometimes rotated as much as 90 degrees (see photo). When machine doubling incorporates rotation of the hammer die, it never amounts to more than 2 or 3 degrees.

As to why ejection impact doubling is restricted to this year and this denomination, we may never know.

Experimentation at the Mint?

In the Bliss press commonly used in this time period, the anvil die rides up and down on a cam. As it sinks down, the anvil die brings a freshly inserted planchet down into the collar. As it comes up, it pushes the newly-struck coin into the path of the ejection finger. Perhaps there was an unusually energetic push from below by the anvil die. However, since all Bliss presses operated in this fashion, perhaps the Mint was experimenting with some other means of expelling a tightly-fitting, newly-struck coin from the collar. Perhaps the anvil die was fixed in position and it was the collar that moved up and down.

Whatever the cause, it would seem that the coin flew into the face of the hammer die, rather than being pushed into it. If the latter was the case, one would expect to at least occasionally see transferred design elements (or at least impact damage) on the reverse face. And we never do.

Additional information and photos can be found in the January/February 2005 issue of Errorscope, published by the Combined Organizations of Error Collectors of America.