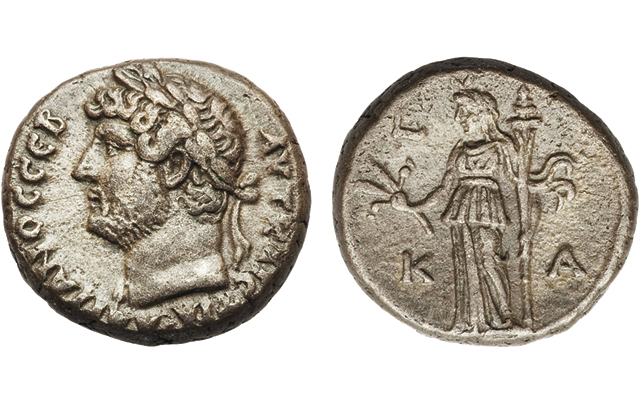 This circa 136 to 137 A.D. billion tetradrachm showing Roman emperor Hadrian was struck in Alexandria, Egypt. It could be affected by proposed import restrictions requested by Egypt. 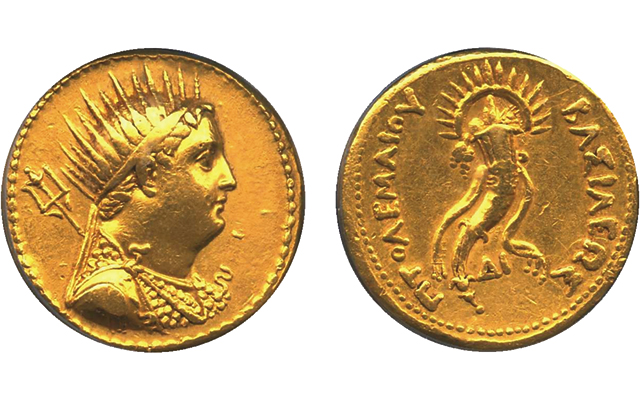 This circa 221 to 204 B.C. gold octadrachm of Ptolemy IV was struck at Alexandria, Egypt, amid the period of Greek rule of Egypt. It could be affected by proposed import restrictions requested by Egypt.

Looting has nearly doubled since the Egyptian revolution of 2011, according to the government of the Arab Republic of Egypt, with more than 7,000 instances reported during the past three years.

In April, Egypt’s government filed a cultural property request with the United States seeking import restrictions on archaeological and ethnological material from Egypt under the 1970 UNESCO Convention. Restrictions are sought for those items representing Egypt’s “prehistoric through Ottoman heritage,” including coins.

Similar arrangements between the United States government and governments in Bulgaria, China, Cyprus, and Italy, among others, have been fought vociferously by collectors of ancient coins, and this request from Egypt is no different.

The Cultural Property Advisory Committee met June 2 to 4 in Washington, D.C., to consider whether to accept or deny the Egyptian request, the full details of which are confidential, according to the April 16 announcement in the Federal Register.

Proponents of the request for restrictions, including representatives of the academic and archaeological communities, also filed comments.

The range of peril to Egyptian heritage includes theft and looting at unsecured museums and construction projects, as well as acts of terrorism, according to a public summary of the request provided by the United States’ Bureau of Education and Cultural Affairs.

The 1983 law known as the Convention on Cultural Property Implementation Act spells out circumstances and material eligible for import restrictions.

Under the guidelines, no object may be considered to be an object of archaeological interest unless such object is of cultural significance; at least 250 years old; and was normally discovered as a result of scientific excavation, clandestine or accidental digging, or exploration on land or under water.

Similarly, four conditions must be met before import restrictions can be implemented, according to the law.

??That the cultural patrimony of the respective nation is in jeopardy from the pillage of archaeological or ethnological materials.

??That the nation has taken measures to protect its cultural patrimony.

??That the application of the import restrictions will act as a deterrent and that other less drastic options are not available.

??That the application of import restrictions is in the general interest of the international community and will still allow for the exchange of cultural property among nations for scientific, cultural, and educational purposes.

The Egyptian government claims that the Ministry of Antiquities and others are actively working to protect that nation’s cultural heritage but that “recent seizures and repatriations, as well as current investigations, make clear that the U.S. market includes artifacts stolen from Egypt.”

None of the examples of looted objects surfacing in the U.S., as cited in Egypt’s public summary, are coins, however.

While generally supportive of efforts to curb looting of antiquities, comments from collectors and industry sources charge that the latest request does not fit the conditions under which import restrictions may be made.

Neither camp debates that looting is occurring or has occurred, but they are at odds about its severity and impact.

Alan Safani, on behalf of the International Association of Dealers in Ancient Art, said that the organization’s members have seen no increase in the number of looted antiquities being offered, even though the government’s capabilities in respect to protecting its heritage amid unrest are unclear.

According to public comments from Peter Tompa, a lawyer and collector of ancient coins who represents pro-collector organizations, nothing indicates that metal detectors are in widespread use in Egypt, “so it is highly unlikely that coins are being illicitly excavated there in any significant numbers.”

Arthur L. Friedberg, past president of the International Association of Professional Numismatists weighed in, representing his company, Coin & Currency Institute. Calling the meeting a “poorly-acted rendition of kabuki theater,” Friedberg wrote that to think the restriction of “thousands of common Egyptian coins which have been found all over the world for centuries would have any impact on the problem is delusional, and is in fact, symptomatic of a small group of radicals whose end game is not protecting cultural property, but of legislating the extinction of collecting.”

Friedberg continued, noting that the sheer volume of Egyptian coins on the market, many of which have been so for generations, is so vast as to not be calculable.

“These coins are so cheap, and often so badly worn from their use in both domestic and international trade, that pedigrees do not exist. Even today, the value of the vast majority of these coins is incredibly low, typically less than $50 per coin,” he wrote.

Such items are hardly “items of cultural significance,” as allowed under the law, Friedberg said.

Not everyone in the numismatic community, however, opposed the proposed restrictions. In her comments, Carmen Arnold-Biuchi, the Demarete Curator of Ancient Coins at the Arthur M. Sackler Museum at Harvard University, supported the Egyptian request for import restrictions.

In those comments, Arnold-Biuchi said that cultural property laws apply in the country in which coins are found, and that looting makes determining this information challenging. While some coins (like the Athenian “owls”) circulated widely, coins like those struck in Egypt under the Ptolemaic standard were intentionally minted so as to dissuade circulation outside Egypt.

Precious metal coins circulated widely, while base metal coins generally remained close to where they were issued, Arnold-Biuchi said in her commentary.

Recent archaeological excavations have rewritten scholarship regarding the minting location for some coins, Arnold-Biuchi said, confirming that they were struck in Alexandria, Egypt, and not Sicily, in modern Italy.

“This is perhaps the strongest argument in favor of the protection of coin finds. Regardless of how common coins are and regardless of their value in today’s market, if the context is lost, their historical value is lost,” she wrote.

“Closed monetary system” or not, Tompa said that Alexander the Great, the Ptolemys, the Byzantines, and the Ottomans all struck coins in Egypt for use throughout their empires that encompassed land both inside and outside the confines of modern day Egypt.

Ptolemaic “Egypt” stretched into Libya, Israel, Lebanon, Syria, Cyprus, and Turkey, based on find data. Coins of the Alexandria Mint are similarly found throughout the empire and beyond.

While a “closed monetary system” argument may be of greater validity when regarding Roman Egypt, new research based on finds recorded under the Portable Antiquities Scheme demonstrates that Roman Egyptian tetradrachms, which had the value of one Roman silver denarius, traveled as far away as Britain, Tompa wrote.

What will collectors accept?

In the interim, bringing in UNESCO forces to protect sites of importance, a measure employed with “some success” in Iraq, would be “highly appropriate,” wrote Safani, the art dealers’ representative.

Limited, specific restrictions are the key to halting the type of looting that has spurred this request, said Sam Spiegel (who is a senior numismatist at Heritage Auctions but was not writing as a representative of Heritage).

“The more a nation limits or bans the ownership, sale and export of historic coins, the more likely that the coins will either pass to criminal traders or be quickly destroyed,” Album said.

It would be easier for finders to melt silver and gold coins than to risk being caught by authorities or looters, Album wrote.

Most comments for hobbyists

A total of 352 public comments were submitted to CPAC for review, with the majority of them representing the coin hobby and trade, and taking the position that coins should be omitted from any ban on imports, blanket or otherwise.

For all their persistence, many like Tompa feel that the restrictions, which will be enacted via a memorandum of understanding, are already assured.

Tompa points to an April 3 report in Egyptian state media that cites Patricia Kabra, a representative of Evan Ryan, assistant U.S. secretary of state for educational and cultural affairs, as saying that the United States will “take all needed actions to have this agreement signed as soon as possible.”

That report was made on the heels of a March 20 editorial appearing in The New York Times citing State Department officials’ promises to Egypt’s nascent government to allow United States Customs and Border Protection officials to act on potentially stolen artifacts with less precise information than is currently required for action.

On March 11, Egyptian Minister of Antiquities, Mohammed Ibrahim signed a memorandum of understanding between Egypt and the Antiquities Coalition, regarding the flow of looted property.

As of June 26, no one from the coalition responded to two inquiries from Coin World regarding the content of that memorandum.

However, CPAC had not, as of press time June 25, made public any decision regarding the request for restrictions.