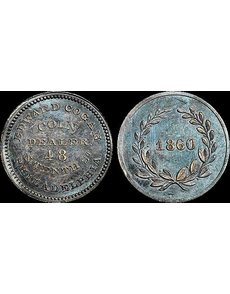 Edward D. Cogan, born Jan. 5, 1803, in Higham Hill, Walthamstow, Essex County, England, came to the United States when he was 50 years old. He was described as “a gentleman of great conversational powers and amiable temper, besides being well-supplied with anecdotes and jokes” in an 1867 issue of the American Journal of Numismatics.

Arriving in Philadelphia, Cogan established himself as a “picture dealer.” The 1855 Philadelphia city directory lists his occupation as “dealer in paintings,” at 47 S. Eighth St., and residing at 519 S. Sixth.

This English fellow also began dealing in coins circa 1855. Thereafter Cogan held nearly 70 numismatic auctions. His first was an 1858 mail-bid sale. Bids were opened on Nov. 1 in Cogan’s store, 48 N. Tenth St., in Philadelphia. In 1863 Cogan printed a list of this sale that enumerated a date set of large cents that Cogan had put together for a customer.

In connection with his coin trade, Cogan issued store card tokens in 1859 and 1860. An 1860 Cogan card is shown. Russ Rulau’s Standard Catalog of United States Tokens 1700-1900 lists a variety of Cogan tokens issued at both Brooklyn, N.Y., and Philadelphia.

Following the Civil War, Cogan resided in Brooklyn, and conducted a number of important auctions in New York, with many innovations, including the first printed prices realized list.

His April 27, 1865, auction of the J.N.T. Levick Collection was postponed a month due to the assassination of Abraham Lincoln.

Cogan penned his reminiscences on his early numismatic activity for the American Journal of Numismatics. He was accorded an honorary membership in American Numismatic Society on Feb. 25, 1869.

Circa 1866 to 1875, according to Rulau, New York City collector Isaac F. Wood published a medal honoring Cogan as “The English Daddy of the American Coin Trade.”

He retired from this business in 1879, succeeded by his son George who fizzled at his daddy’s trade. The elder Cogan died April 7, 1884.

FRED L. REED III has been a collector and writer for many years. Reach him at www.fredwritesright.com.