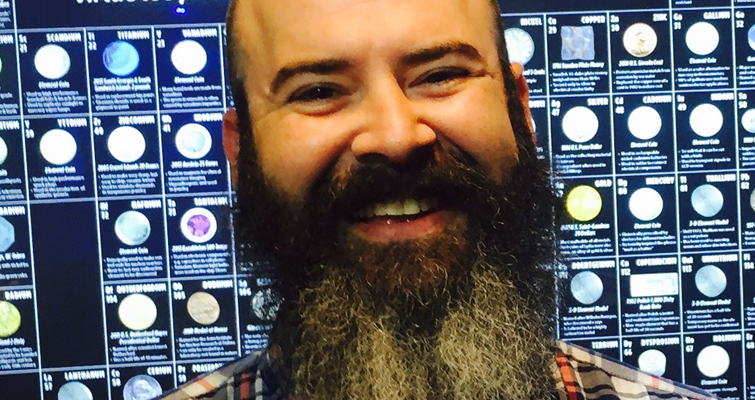 Sam Gelberd Numismatic Educator, American Numismatic Association, Colorado Springs, Colo. Sam joined the ANA in 2013 after teaching middle school, although he was first introduced to the group in 2006 when he attended the Coins in the Classroom course at the ANA Summer Seminar. He calls his current role his dream job

If you’ve been to an ANA show in the past couple of years, you’ve likely noticed Sam, with his spectacular beard, helping people old and young alike discover coin collecting. His exhibit on Great Beards on Coins was a standout at the 2015 ANA show.

Q: What’s the secret to get young people involved in our hobby?

A: Patience is paramount, as we learn by different methods, and forcing a child to become a collector often results in failure. Children truly love the feeling of accomplishing something on their own. It’s okay to give coins to kids — but make them earn ‘em, so they’ll learn from ‘em! It will be much more significant and has greater potential to create lifelong collectors. And focus on the importance of historical value, rather than monetary. When I was a World History teacher I kept a bucket of foreign coins in my classroom. I would let students who earned an A on their tests select one as a reward. Holed coins were always the most popular, as students would string them around their necks, in a competition to see who had earned the most throughout the year. I strongly advise educators to connect with their local coin clubs and dealers, as many of them want to help children, but may not know exactly how to go about it.

Q: What do you love about your job?

A: It never gets old when I see someone genuinely understand something I’ve explained to them — what teachers call those “Ah-ha” moments. I also field daily questions from the public, and it is imperative to handle each person’s inquiry as patiently and respectfully as possible — even when you have to tell people repeatedly that their 1943 “silver” penny is not going to afford them early retirement. No one wants their dreams crushed, but sometimes, that’s exactly what this position requires.

Q: What do you collect now?

A: I’ve collected coins on and off since age 9. I’ve also collected stamps, sports cards and memorabilia, comic books, beer bottles, vinyl records, and political memorabilia. Recently I’ve started to save used gift cards. Ask anyone who was a kid in the ‘50s & ‘60s what they did with their baseball cards — and the regret they experienced in the ‘80s & ‘90s when the market for these items exploded. Why? Because almost nobody saved them in great condition, and used them as toys. What do most people do with their used gift cards? They go in the trash — for now. But they were used as a medium of exchange, just as coins and bank notes, so only time will tell if they will become widely collected. There are websites and forums already dedicated to this new exonumismatic segment of the hobby, aka, Cartodorology.

Q: Your beard exhibit was incredible! What inspired you to prepare it?

A: As I started growing my current, full beard over the last few years, I started noticing that many older, foreign coins featured men with some spectacular facial hair, spanning the millennia. I know many people collect coins by theme/topic, so I thought it might be interesting to see a grouping of these “bearded” coins, so I decided I just had to build this exhibit. Every time I typed the word “Beard” or “Moustache” they were invariably capitalized as a subconscious show of respect for these men, some of whom were great or not very great human beings, but all with respectable facial hair.