Eclectic currencies will get attention in Kagin’s sale 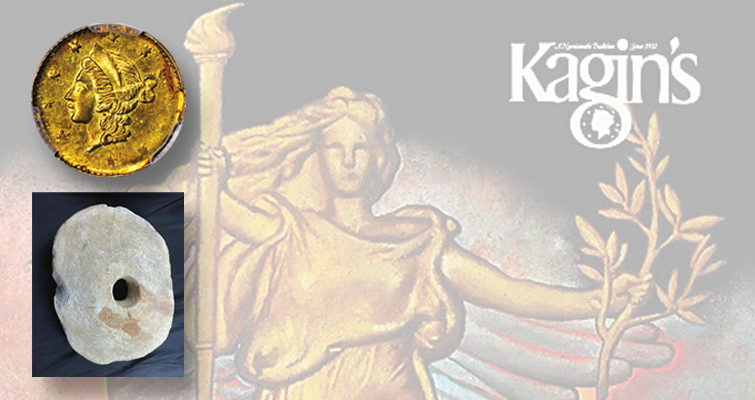 The cover of the Kagin's auction catalog features work by Justin Tecson. Shown are examples of top lots expected in the March sale.

All images courtesy of Kagin’s Auctions.

Kagin’s will offer the William C. O’Connor Collection of California small-denomination gold coins on March 11 and the Charles J. Opitz Reference Collection of Primitive/Odd & Curious Money the next day as the lead consignments of its March 11 to 12 auctions.

The sales were originally set to coincide with the American Numismatic Association National Money Show scheduled to be held in Phoenix, Arizona, which was ultimately canceled.

The cover of the catalog is a rendition of the 1907 Saint-Gaudens, High Relief $20 gold double eagle by artist Justin Tecson, and the firm’s president Don Kagin says that the sale offers “something for everyone!”

The O’Connor Collection is among the most complete holdings of Period One California fractional gold coins, with 124 of the 142 possible varieties recognized by Professional Coin Grading Service, including three considered unique.

The coins are attributed by Breen-Gillio numbers as classified in their book California Pioneer Fractional Gold. Kagin adds, “Because the collection is so complete, extensive notes on die variety and manufacturer have been included, making the catalog a lasting reference.”

Some of the offered coins are used as the plate coins in the second edition of the Breen-Gillio reference book.

The small-denomination coins were privately issued starting in 1852 to alleviate a shortage of small change, and they were soon popular as souvenirs, since their tiny size made them inconvenient for actual daily use in commerce. The earlier issues are called Period One pieces, distinguished from later ones that were produced after private coinage was made illegal.

O’Connor developed his interest the series in the mid-1970s, being most active in the 1990s, but still adding to his collection as late as 2003. The catalog’s tribute to the collector notes that he loved the thrill of the hunt for treasure, saying, “He would rummage through boxes of trinkets, looking for the needle in a haystack, and he became obsessed with the hunt,” traveling to shows across the Midwest where “he would have sleepless nights before participating in many long distance phone auctions, anticipating the acquisition of a precious coin, sweaty palms and stomach churning.”

The Kagin catalog continues, “His love of these coins spanned from the unique patina of each coin to the uniqueness of their shape and striking variations.”

Further it notes that O’Connor believed the earlier California issues were used in commerce. “He shared stories of how trade was done before there were coins in the west, by taking pinches of loose gold, and the bartenders with the fattest thumbs would get the most gold in their pinch,” thus making the small-sized California small-denomination gold coins a solution.

Among the unique coins in the collection is a BG-204A unique undated (1853) round quarter dollar graded About Uncirculated 58 by PCGS that has an obverse profile of Liberty inspired by contemporary Coronet gold type coins and a unique reverse die, “suggesting that it broke almost immediately (though there are no die cracks evident).” Kagin’s disputes a theory that it is a pattern type saying, “It hardly seems to be a rejected pattern.”

While known for more than 60 years, the piece in the auction is the only example that has yet appeared. It was purchased by the collector at Kurt Krueger’s 1984 Detroit ANA convention. Here, it carries an estimate of $10,000 to $20,000.

An 1854 “Defiant Eagle” quarter dollar graded AU-55 by PCGS is among the most highly coveted of Period One coins, with just 10 known. It has been called “the king of fractional gold,” but Kagin’s notes, “its distinctive design, late appearance, and heavy weight (it contains close to full value of native California gold) have caused its authenticity to be questioned,”  adding, “California gold scholar Mike Locke has expressed doubts because of its late appearance, high weight and purity, and extreme rarity.”

The cataloger points out that the die work appears to be that of the 1850s, with the denomination formatting consistent with early issues and the slanting 5 of the date resembling many circulating U.S. coins of the period.

The type was generally unknown to numismatics until two examples turned up in a 1909 auction, although one example is possibly documented in a collection assembled in the late 19th century. While its origins are a bit murky, the popularity of the type today is undeniable.

On the offered example, Kagin’s observes “attractive light coppery toning with some original luster still remaining,” placing an estimate of $10,000 to $25,000 on it.

Objects generally collected under the broad descriptive label “Primitive, Odd & Curious Money” from the collection of Charles J. Opitz will be offered at Kagin’s on March 12, and many are illustrated in his catalog An Ethnographic Study of Traditional Money. The auctioneer writes on the comprehensive collection, “Nearly every lot has been off the market for decades,” adding, “Though all continents are represented, this collection is particularly rich in the traditional money of the South Seas and New Guinea, many collected by Mr. Opitz personally on his visits there.”

Among the most beautiful objects in the collection is a vibrant object described as, “Possibly the finest known rare and popular red feather coil,” a form of money used in the Santa Cruz islands. Feather coils are long, wide coils of glued-together bird feathers that reportedly originated in the mid-1860s and are documented as being used as currency as early as 1871.

The process to make these was labor-intensive, as the catalog entry describes: “Each coil was made on order and required the efforts of three men: one to snare 300 scarlet honey eater birds and pluck their red feathers; another to shoot pigeons with bow and arrow, glue their feathers into a platelet, and trim them with the red feathers; and a third to bind each of 1,500 red-tipped platelets onto two cords of bark fiber such that they overlapped, so that the whole 30-foot coil seemed to be composed entirely of red feathers.” A single coil took up to 600 hours of work to produce.

Over time the red color fades, reducing its value. Opitz adds, “Mine is the best, as the coil went directly from the makers to my contact who immediately sent it to me. On a coin scale this is a MS-70. It is bright red with no feathers damaged and everything as made,” while Kagin’s estimates it at $12,000 to $25,000.

The stone money of Yap is likely the most commonly cited example of “traditional” money. It was used as currency in a group of islands in the Caroline Islands group, quarried on the island of Palau — 250 miles away — then shipped to their destination, drilled and finished by hand. They are generally round with central holes for drilling. While originally carved with stone tools, the use of iron tools was introduced in the second part of the 19th century. Further, steamships allowed transport of increasingly larger stones, as the limitations of canoes no longer capped the size.

The largest of the three “Yap stones” offered from the Opitz Collection measures 21.75 inches at its widest point and is 4.75 inches thick at the center, weighing in at 79 pounds. Kagin’s writes, “This piece is an example of the original stone money that amazed Europeans when they first visited this remote island,” noting a few rim chips, but calling it “worthy of the finest collection and great bragging rights.” Correspondence documenting its provenance, included in the lot, records that it was first included in the estate of (Arthur) Gordon Gill, who purchased it from Ralph Mitchell in 1952, who got from “ ‘young fellow,’ a native of Yap, 1940s?” It has a hefty estimate of $20,000 to $30,000. 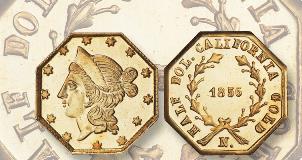 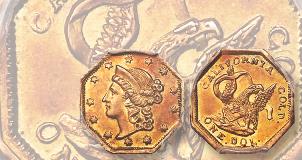 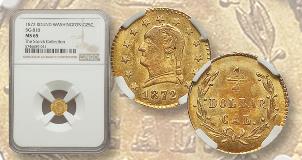